Marvel vs. Capcom Wiki
Register
Don't have an account?
Sign In
Advertisement
in: Akuma, Capcom Characters, Characters in X-Men: Children of the Atom,
and 7 more
English

My skills are unparalleled!

Akuma (悪魔?), known in Japan as Gouki is a character from the Street Fighter series by Capcom. He is a powerful warrior fixated on mastering the Satsui no Hado and one of Ryu's deadliest rivals.

See also: Akuma's alternate costumes in MvC3, or in UMvC3

Akuma has red hair, wears prayer beads around his neck, and wears a black belt with a torn black or blue gi. The kanji ten (天?, lit. sky/heaven/providence) can be seen on his back when it appears during certain animations. He wears three ropes in place of his belt and brown gloves in his newer designs from Street Fighter IV sub-series. One of his most notable appearance is that he wears sandals during a fight, excluding his Street Fighter Alpha incarnation.

In his ending, Akuma says to Magneto, "I'm the master warrior!" The credits show a bunch of X-Men characters in a dizzy motion and after the credits, Akuma does a taunt.

Akuma makes a very small cameo in one of Anita's moves, Flame Sword.

Akuma is standing on top of a Japanese temple. Wolverine asks Akuma what he knows about his past. He says to Wolverine, "... Want to talk? Force me." After that they start to fight each other.

Akuma has another form, who served as a final boss, known as Cyber-Akuma, a cybernetic form brainwashed by Apocalypse. He also appears alongside Dark Sakura when you fight her after reaching certain conditions, and in Dark Sakura's ending in the Japanese version of this game.

Akuma notes that no one else is left to rival him on Earth and prepares to journey through the galaxy to find a worthy challenger, leaving behind the bodies of Ryu, Wolverine, Captain America, Chun-Li, and Spider-Man. This mimics his ending in SNK vs. Capcom: SVC Chaos, where after he finds out no one is left to rival him on Earth, he goes back to heaven to challenge Athena's master.

Although Akuma does not make an appearance in the game, the Satsui no Hado plays a part in the story. Ryu seems to use little bits of it to fight against the Maverick-infected Dahren Mohran alongside Hulk and the Monster Hunter. When Jedah invades Avengers Tower to destroy the base along with the other heroes and Thanos inside, Ryu began to succumb to the Satsui no Hado, catching Thanos' interest on that dark power. Thanos then interferes and stops Jedah from using the Soul Stone to weaken Ryu's human soul and turn him into Evil Ryu, effectively removing a burden Ryu has had for a long time.

At the end of the game's after credits scene, the Satsui no Hado gains a significant boost in role as Thanos stole the energy of the Satsui no Hado inside Ryu and claims that at its full capacity and potential it can and has destroyed a god, which he then tries to use to destroy Death and Jedah after Death betrays him at some point in the story. Due to the cliffhanger nature of the ending and how the game is made plus the several nods to Ryu almost succumbing to it, Akuma is likely to make an appearance due to him being the current physical manifestation of the Satsui no Hado.

While some people often refer to Akuma as a shoto clone (characters who fight identically or similar to Ryu by utilizing his attacks, usually possessing a projectile and anti-air special, with a physical distance coverage optional), he has more than enough moves to distinguish himself from his lighter counterpart, utilizing a very different playstyle. Back in his earlier appearances, Akuma/Gouki simply had his moves as a combination of both Ryu and Ken's; his Hadouken was both as slow and strong, his Shouryuuken did multiple hits with Ryu's damage, and his Tatsumaki Zankuukyaku did multiple hits like Ken's and knockdown like Ryu's, giving him juggle capabilities. His overpowered damage output was balanced by giving him very low health, making him a classic example of a Glass Cannon in most of his appearances after most of Street Fighter II. His low health storywise is shown to be Akuma holding back his true power in order to enjoy his fights. Most of his recent versions are often balanced, though some game-breaking tools still tend to exist. 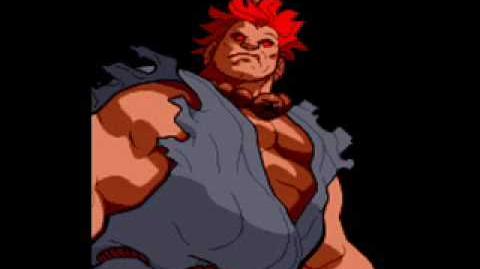 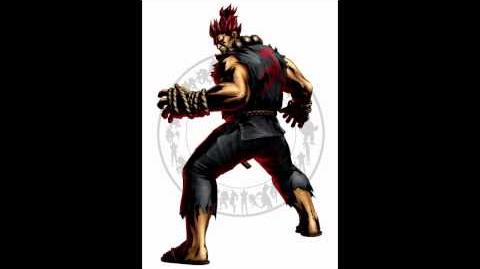 Akuma's moves in Marvel vs. Capcom 2: New Age of Heroes

Akuma's moves in Marvel vs. Capcom 3: Fate of Two Worlds