Ammy! Chill out! Don't you know it's bad to bite people who are down on their luck?

Amaterasu, also known as Ammy, is the main protagonist of Ōkami, a video game by Capcom. She is the Sun Goddess to all of Nippon and the ruler of the Celestial Plain. She is accompanied by Issun, a traveling artist.

See also: Amaterasu's alternate costumes in MvC3, or in UMvC3

Amaterasu, in keeping with her wolf nature, is gentle, loving and utterly loyal to her friends (as shown when she wept with great sorrow in her refusal to let Issun go when she boarded the Ark of Yamato even though she knew well he could not go with her) but is crushing and relentless towards those with evil in their hearts. She at times falls asleep when people have long talks with her and so she may be easily bored. Perhaps due to Issun's encouragement of "Leap before you think.", she may have become more brash when dealing with certain situations.

Amaterasu is seen in Marvel's Savage Land, with Issun complaining about wanting to take a quicker way out. She is seen fighting alongside Ka-Zar, Shana, and Zabu against a dinosaur (both the dialogue in this scene and Amaterasu's moveset, imply that her ending takes place sometime before she boarded the Ark of Yamato, but after she acquired the Tundra Beads).

To master Amaterasu, you'll need to learn how to use all three of her weapons and their techniques, and seamlessly transition to the correct weapon for the situation at hand. Amaterasu is one of the most versatile characters in the game. She can play any situation; rush down, run away, keep away, punishing, and has some of the best assists in the game as well. Much of the game's keepaway doesn't work on her, because she can simply crouch underneath any threat. Players looking for a jack of all trades, master of all trades character will be at home with Amaterasu, so long as they can handle having a very low amount of health. When used as a rushdown character, Amaterasu can use her high speed and small hit-box to close with the opponent and unleash fast combos. She also works well at range with her Devout Beads, as they give her long reach, quick, low-damage combinations, and lock the opponent into a standstill, allowing you to chain into a with other attacks. Using her Tundra Beads ability also provides some lock down and anti-air game. 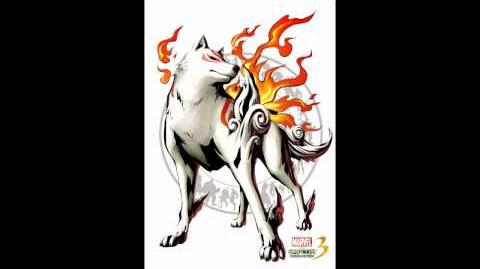 Marvel VS Capcom 3 - Amaterasu Theme
Marvel vs. Capcom 3: Fate of Two Worlds
Add a photo to this gallery

Amaterasu's moves in Marvel vs Capcom 3: Fate of Two Worlds

Retrieved from "https://marvelvscapcom.fandom.com/wiki/Amaterasu?oldid=77297"
Community content is available under CC-BY-SA unless otherwise noted.