Anakaris is a playable character in Marvel vs. Capcom 2: New Age of Heroes.

In the fourth installment of the Marvel vs. Capcom series, Anakaris makes a surprising selection for the Capcom camp. This incarnation of Anakaris is slightly faster and he maintains most of his Darkstalkers moves, with slight exaggerations. One of his new EX Moves is the Serpent Coffin which is an enhanced version of his Cobra Blow. In this variation, Anakaris opens his coffin and releases three to four giant serpents at a time thrusting very fast horizontally. Repeatedly tapping the buttons increases the number of serpents coming out. His only unique Super Combo in the Marvel vs. Capcom series is the Pharoah Illusion whereupon he transforms into a gigantic form of himself with his hands suspended in the air and volleying the opponent back and forth.

Anakaris is the slowest character in the series in terms of mobility (from his walk to his jump). While this would seem to be a great disadvantage, many skilled Anakaris players have been able to find benefits for his slowness. His jump, for example, is more or less an aerial float that lasts a little over three seconds before landing. In between the launch and the land, Anakaris can either float backward or stay suspended in the air for a fixed time. While suspended and floating, Anakaris can move horizontally in either direction and can even ascend if needed. This tactic makes Anakaris a superior challenge in the air.

To counter balance Anakaris slow walk and dash, he possesses a unique backward dash when performed at the corner of a screen. Upon dashing backward, he vanishes from one end of the corner and reappears to the opposite end. This makes for a quick getaway if his opponent plans on trapping him in the corner.

Anakaris possess the most unconventional array of special moves compared to other characters in the series. The Pharaoh’s Curse, a slow moving air-to-ground projectile, turns the opponent into a small vulnerable icon of their original self for a short period of time. During the transformation, the opponent can only jump or move backward or forwards. This unique move has been a trademark for Anakaris and has become very popular for Capcom as well. Anakaris also has unique projectile moves, which involve him putting his limbs into an entrance portal and coming out another. This takes a considerable amount of time and leaves a huge blind spot between him and his attacking limb. 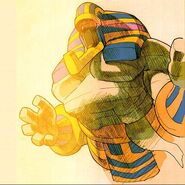 Versus and Hyper Combo Pose

Anakaris with Doctor Doom in the ending

Anakaris's moves in Marvel vs Capcom 2: New Age of Heroes