Anita was found by Donovan, when a group of people found out she was a Darkstalker. Donovan took her with him, but he realized that she does not show any emotion. In the anime, he cut her doll’s head off to see if she would cry. However, when Hsien-ko and Mei-Ling went off to fight Pyro, Anita started screaming and crying, worried about them being severely hurt.

Anita is capable of psychokinesis. It isn't known how she came to inherit this ability. Whether by learning this herself or by human evolution, it's an open book. It's also not known if other humans are capable of developing powers both like and unlike Anita's. However, Donovan and Hsien-Ko do possess abilities beyond regular humans but their abilities stem from different sources.

Anita appears in Marvel Super Heroes as a secret playable character in the Japanese version of the game. However, since she was just a test character, she was incomplete and can be considered a cheap character. She is full of glitches and some of her moves are overpowered. She's not normally unlockable in the US version, but can be played via hacking devices, which shows signs that she was incomplete such as not having her own portrait, name tag or quotes (borrowing all from Thanos), nor an actual ending. Some of these issues were fixed in the home console version, such as giving her own portrait art and removing the glitched "Thanos" name tag, although she still uses Thanos's quotes and lacks an ending.

In Marvel Super Heroes, Anita appears with a mini version of Donovan's sword, Dhylec, with a red ribbon tied to its handle. Some of her other attacks involve cameos from other Capcom characters such as Super Street Fighter II Turbo's Akuma, Hsien-Ko's sister Mei-Ling and the corpse or passed out body of Donovan. Most of Anita's moves are ripoffs of Donovan's moves.

Anita as an assist character in Marvel vs. Capcom 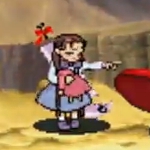 Anita's portrait from the console version of Marvel Super Heroes

Anita using Thanos name in Marvel Super Heroes.
Add a photo to this gallery
Retrieved from "https://marvelvscapcom.fandom.com/wiki/Anita?oldid=71263"
Community content is available under CC-BY-SA unless otherwise noted.