Edit
watch 03:23
'Marvel vs. Capcom: Infinite' - Arthur Tutorial
Do you like this video?
Play Sound

I will fight you, fair and square.

Arthur is the main character of the Ghosts 'n Goblins series by Capcom. He is a brave knight who ventures to the Demon Realm in order to rescue his beloved Princess Prin Prin.

See also: Arthur's alternate costumes in MvC3, or in UMvC3

Arthur is a keepaway character, being notable for his projectile arsenal. Arthur is a really slow moving character, his forward walk is animation of his stage movement in Ghosts and Goblins, having the steps performed no relation with the actual distance covered. Also, he lacks of dashing moves of any kind. His jump follows the same pattern, with a slow raising and landing speed. Worth of mention is the fact that Arthur has access to a double jump feature, in which he reaches a superior height than most character's same maneuver. This movement attributes make him difficult to take a close offensive strategy, but enables an excellent projectile-based fighting style, giving the player time to fire several attacks in the way up and down of the jump, and easily catch opponents in the air if they try to close the distance in this way. 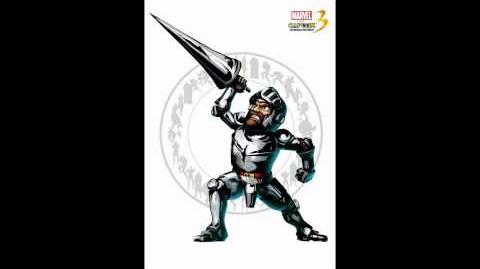