Edit
watch 03:33
'Marvel vs. Capcom: Infinite' - Chris Tutorial
Do you like this video?
Play Sound

Chris Redfield is one of the main characters of the Resident Evil series by Capcom. He is a BSAA operative dedicated on destroying bio-organic weapons and fighting against bio-terrorism.

See also: Chris' alternate costumes in MvC3, in UMvC3, or in MvC:I

Chris is very close to his family and friends, specifically with his little sister Claire and his longtime partner Jill Valentine, whom he would both give his life to protect. He cares greatly for the lives of innocents, something that caused him to argue with his superiors in the military. Chris has a long-standing friendship with Barry Burton, who is an old family friend of Chris' family. Barry was the one who recruited Chris for S.T.A.R.S., after Chris left the United States Air Force.

Serving as Point Man in the Alpha Team of S.T.A.R.S., Chris has earned the trust of his comrades. In particular, he's developed a close friendship with Jill Valentine, the only female member of his S.T.A.R.S. unit.

Chris' ending starts with Daredevil, in his Matt Murdock alter-ego, prosecuting Wesker for the Raccoon City Incident of 1998. Before Wesker can set himself free, Chris jumps in to stop him.

88 Days after Convergence caused by Ultron-Sigma, Chris is with other heroes such as Thor, Chun-Li, and X in Xgard (a fusion between Asgard and Highway City) as they fight Ultron Sigma's forces. Upon discovering that Ultron-Sigma had been capturing Thanos when his half was Ultron in normal Marvel Universe, Chris, Doctor Strange, Chun-Li, Rocket Raccoon and Strider Hiryu operates a stealth rescue mission to rescue Thanos. After Ultron-Sigma arrives and starts fighting off heroes easily, Chris arrives shooting Ultron-Sigma while saving Thor from being brainwashed by Ultron Sigma, which doesn't affect Ultron-Sigma and only attracts attention to himself, but Chris shows no fear to be blown up by the villainous robot. Luckily, Captain America manage to save Chris, with all heroes escape with Doctor Strange, confirming Thanos' rescue mission is a success, as a mean to lure Ultron Sigma into engaging the heroes who is outside the rescue mission.

Back in a safer base in Avengers Tower at New Metro City (a fusion between Marvel version of New York and Metro City from Street Fighter/Final Fight, the heroes make a separate mission to search for the remaining Stones (Time, Power, Mind and Soul Stones) scattered across the converged world thanks to Thanos' tips, despite without the Reality and Space Stones, which are still under Ultron Sigma's possessions. As Doctor Strange releases the containment that shuts Thanos during his imprisonment by Ultron Sigma, Thanos alert the heroes that Ultron Sigma had planted Thor an in-progress Sigma virus earlier before Chris' team arrived in time for the heroes to retreat after rescuing Thanos, but was too late, as the progress start infecting Thor completely, losing the heroes' reliable Thunder God of Norse, shortly before Gamora and Nova arrived in time to join their fellow heroes.

Chris is sent to find Mind Stone in A.I.M.BRELLA (a merger terrorist company between A.I.M., and Umbrella from Resident Evil), where he is accompanied by Spider-Man and Frank West. The three heroes found out that A.I.M.Brella conducts a mixture B.O.W. experiment with the Symbiotes for the company's expanding army. Much worst, A.I.M.Brella captured New Metro City mayor Haggar, yet can still be saved. However, Haggar mistakes the three heroes as one of A.I.M.Brella members, until Spider-Man and Frank West calms him down. Chris later heard a conversation between the A.I.M.Brella leader M.O.D.O.K., the possessor of Mind Stone, and his God of Death associates, Jedah, who happens to be the possessor of Soul Stone, revealing A.I.M.Brella's allegiance with Dark Kingdom (a fusion between Dark Dimension and Demon Kingdom) to create a large-sized ultimate symbiote abomination and the Dark Kingdom's invasion on Earth for their chaos, using a teleporting device between Earth and Dark Kingdom. He and Haggar fight and defeat Nemesis, while Spider-Man manage to get the Mind Stone from M.O.D.O.K. and Frank destroys the teleporting device. However, the teleporting device still active and the large Symbiote, controlled by Jedah comes out and chases the four heroes. As the four heroes manage to get out of A.I.M.Brella to fight the large symbiote monster outside, Chris shots the symbiote, which indirectly spills on Spider-Man, controlling the web-head's body into attacking his fellow heroes, leaving Haggar and Frank to find any environments that can project higher sound waves nearby to rescue Spider-Man, while Chris tries to buy his time to distract the symbiote along with it.

Chris's moveset consists of using a variety of weapons, including, but not limited to: Magnums, Flamethrowers, Shotguns, and Rocket Launchers, making him a very versatile keep-away character. His close-combat lacks range, but is compensated by power. He also can special cancel many of his moves.

With his heavy arsenal of firearms and explosives, Chris plays well as a keep-away character. His dependable sub-machine gun can keep characters at a distance, while the shotgun stuns the opponent in addition to inflicting damage, leaving them vulnerable to combos. In particular, it is easy to perform the Grenade Launcher Hyper Combo off of his sub-machine gun attack. Chris' mines can serve as traps to catch brash rushdown characters off guard, as can his incendiary grenades. One main weakness of Chris is his lack of anti-air attacks. He has a hard time defending against opponents who focus on overhead aerial assault, so characters with anti-air assists are highly recommended. 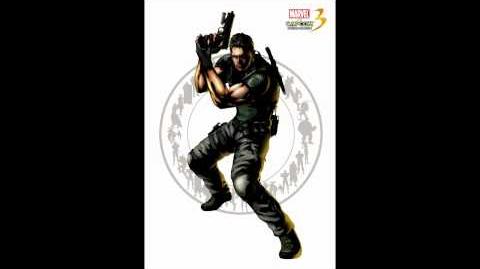