I don't do overtime, and I don't particularly like rematches, either. So would you mind accepting your loss and going home.

Crimson Viper, or simply C. Viper, real name Maya, is a character from the Street Fighter series by Capcom. She is an undercover agent who fights with an assortment of gadgets on her special battle suit.

Nick Fury shows up at her darkened apartment just as she's getting home and offers her a job in working for S.H.I.E.L.D.

Viper is a rushdown type character, employing the use of mixups, feints, and baiting. Viper is the only character in MVC3 that has EX moves that cost 1 meter per use, making her heavily meter-based. She can also perform eight-way angled air dashes for good mobility. She has a Focus Attack from SF4 that can be used as a close range counter attack and can combine her Seismic Hammer and new Optic Laser attacks to control space and force her opponent to come to her. 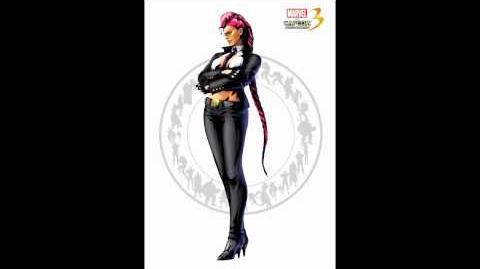