My creator wants you dead. It is done...

Cyber-Akuma, known as Mech-Gouki (メカ豪鬼 Meka Gōki) in Japan, is an original Capcom character and the final boss in Marvel Super Heroes vs. Street Fighter. He's a cyborg version of Akuma.

Interested in Akuma's power, Apocalypse captures and transforms him into one of his servants, implanting him with cybernetic enhancements covering the left half of his face and body. These enhancements include a projectile "rocket punch" known as Booster Rocket, a set of metal wings which come out of his back and four extra arms (only seen in a victory pose). These mechanical parts provided Akuma with superior strength, speed, greater ki manipulation, flight and an almost indestructible armor.

Cyber-Akuma is completely subservient to Apocalypse and follows his every command (as displayed in his victory quotes), believing himself to now exist entirely to bring death and destruction to everything and everyone. He's faced after his master's defeat and is so powerful that he has no tag partner, fighting on his own.

Cyber-Akuma has the same generic ending as all secret characters, showing him posing in front of the Hyper Combo background with the words "Congratulation! You've defeated the game with a secret character!" under him.

Cyber-Akuma later became Akuma's DLC costume in Ultimate Marvel vs. Capcom 3, although this is just a cosmetic change, and makes no alteration to Akuma's movelist.

Unplayable in the Arcade release, Cyber-Akuma is unlockable in the home console versions:

He has the same special moves as the original Akuma, but they are upgraded, are more powerful and can deal a massive amount of damage. However, his main weakness is that, despite taking a lot less damage from most attacks, he takes normal damage from throws, being defeated quite easily if the player decides to throw him often.

His theme is the same as Akuma's theme in Marvel Super Heroes vs. Street Fighter. 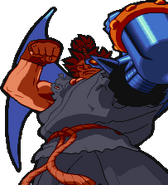 Cyber-Akuma in Ultimate Marvel vs. Capcom 3
Add a photo to this gallery

Retrieved from "https://marvelvscapcom.fandom.com/wiki/Cyber-Akuma?oldid=75044"
Community content is available under CC-BY-SA unless otherwise noted.