Marvel vs. Capcom Wiki
Register
Don't have an account?
Sign In
Advertisement
in: Cyclops, Marvel Characters, Characters in X-Men: Children of the Atom,
and 4 more
English

Cyclops, real name Scott Summers, is a character from the X-Men series by Marvel. He is a mutant who can fire powerful beams of energy from his eyes, with the aid of his ruby-quartz visor.

Cyclops has the ability to emit scarlet beams of energy from his eyes, known as "optic blasts". He constantly absorbs ambient energy, such as sunlight, and uses it to power his optic blasts. Due to a head injury received as a child, he cannot shut off his power and thus must constantly wear a ruby-quartz lens on his visor or sun-glasses.

Cyclops, as the long-time field leader of the X-Men, is a master tactician and strategist, as well as an expert pilot. He is also an expert martial artist, holding black belts in Judo and Aikido.

Magneto tries to persuade Cyclops to join him in his conquest of mankind. Cyclops refuses and is attacked by Magneto. He escapes with the other X-Men as Avalon collapses. Cyclops ponders about Magneto's purpose and whereabouts, saying that he always returns. At the X-Men headquarters, he is greeted by Jean Grey. Colossus later brings news that Omega Red has been spotted. Cyclops leaves along with the other X-Men.

After the destruction of Apocalypse's base, Cyclops felt that he understands the way humans and mutants need to live peacefully. He thanks Ryu and bids farewell to the Street Fighters. He leads the X-Men to fight for peace once more.

After fighting together again, Cyclops thanks Ryu saying that they make a good team. He says that in the future they may work together again.

Come and get me! 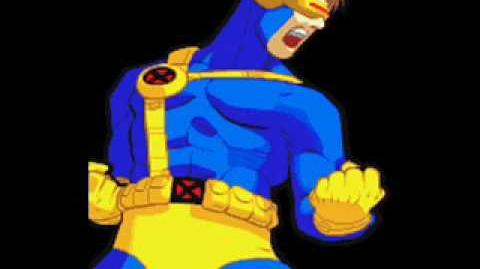