Edit
watch 03:18
'Marvel vs. Capcom: Infinite' – Dante Tutorial
Do you like this video?
Play Sound

Dante is the main character of the Devil May Cry series by Capcom. He is the son of the demon Sparda and the younger twin brother of Vergil. He is a Devil Hunter dedicated on eliminating demons and supernatural entities that threaten the human world.

See also: Dante's alternate costumes in MvC3, in UMvC3, or in MvC:I

Like his father, the Dark Knight Sparda, Dante has naturally white hair and cyan eyes. As for clothing, he wears his Devil May Cry 3 outfit which consists of a red trenchcoat, black fingerless gloves, brown pants and brown boots. In Devil May Cry 3 he's shirtless, but in the rest of the series his shirt is closed.

Throughout the Devil May Cry series, Dante is incredibly cocky and flippant, mouthing off to even the most powerful demons, and generally enjoys rubbing people the wrong way. He does mature somewhat as time goes by, becoming much more calm by the time of Devil May Cry 4, but never really loses this attitude. Dante is seemingly totally unafraid at all times, or is at least stoic in this way, whether being attacked by the Seven Hells in his office or being swallowed by a giant serpent demon. His brother also shares this similar calm-and-fearless disposition.

With the exception of Devil May Cry 2, Dante rarely shows any seriousness (and even in DMC2, it is revelead at the end that it was a facade). He can be serious when the situation calls for it, but can still remain calm during such situations and is never without a witty taunt or comeback. Dante can seem at times to be uncaring or even callous, but actually has a very strong sense of justice and prefers to fight fairly. He can be counted on to do the right thing, even if he makes cynical quips about it the entire time.

Unusually, while he has issues with his own demonic side, and was at one point totally unwilling to accept its existence (going as far to say he didn't have a father). Dante has little qualms about accepting demons who choose to be good, such as Trish and Bradley. Though Dante is quoted to believe that "humans are often worse than demons" in the anime, he refuses to kill full-blooded humans.

Dante values family and friends very highly, and always hides this behind his insincere, jokey attitude. He cared deeply for his mother and, even despite their extreme differences, also cares for Vergil. Even after 3 boss fights worth of fighting over the course of Devil May Cry 3, Dante still tried to save his brother when he was falling into the Demon World, and even shed a tear over losing him, hence inspiring the name of his demon-extermination agency, Devil May Cry. As of recent, the brothers seem to be rekindling their relationship and making up for lost time and huge differences, as per canonical events of Devil May Cry 5.

Dante's ending features him preparing to fight against Ghost Rider (another demon hunter). It also features him being able to break the fourth wall, in a similar fashion as his rival, Deadpool.

He's at his desk when he notices Mephisto behind him who offers to make Dante a deal to bring back his mother and help bring him and his brother back together. However Dante turns on Mephisto and instead makes a new deal that he'll hunt down someone for Mephisto for a price, and he won't kill him. As a result, Mephisto is quick to bring up Blackheart so which Dante decides to go though with and makes Mephisto pay triple for the job.

Dante is involved in a number of situations regarding the story and functions as the story's overall protagonist. He is seen alongside the heroes in the failed raiding of Xgard to take on Ultron Sigma.

Dante is one of the ones that retreats back to the Avengers tower in New Metro City to decide wether or not it's safe to trust Thanos. Dante ultimately sides with Captain America as trusting him is the only option left to them, opposing Iron Man and Chun-Li.

Dante is also involved in the fight against a Symbiote-infused monster summoned by Jedah.

However the threat is far from over and Ultron Sigma mutated into Ultron Omega due to being destroyed by the Soul Stone. Dante is captured and tortured by Ultron Omega who tries to take the Soul Stone again but Spider-Man intervenes and webs it away from him and throws the stone to Thor who catches it and uses it to free himself from Ultron Omega's control and saves Dante. Wanting payback Dante steps up to take down Ultron Omega and is joined by Captain Marvel who is equally unimpressed with Ultron Omega. Together the duo is able to overpower and overwhelm Ultron Omega clearing the way for X to fire the newly created Infinity Buster to end the threat once and for all. However, two world are still in converged states due to Reality Stone was cracked from the previous battle between Thanos and Ultron Sigma, leaving the said stone requires few times to be repaired. Afterwards, Captain America gets on Dante about taking a massive risk giving him the Soul Stone but Dante shrugs it off and disagrees and leaves with the other hero's, returning to his normal duties as a demon hunter.

Dante has a massive amount of command normals and special attacks, more so than any other character in the entire series. Dante's moveset gives him a powerful rushdown game with lots of combos, crossups, mixups and pressure, making him a character that excels well in literally any field as a souped-up Jack-of-All-Trades character, with average health and damage output to date. He makes an extremely effective battery character (or on-point altogether) since his specials allow him to extend his combos greatly without using his hyper combos. His normals also have great range, and his crouching L is a superb low hitting poke. His moves only deal average damage, and Dante only using a few of his tools, can be just as lethal; Dante in the hands of an expert or novice alike can at times see no need to rely on his full moveset. But regardless, players must be mindful of his heavy damage scaling and lack of conversions off of his throws (making him lack a good way to open up foes during pressure). 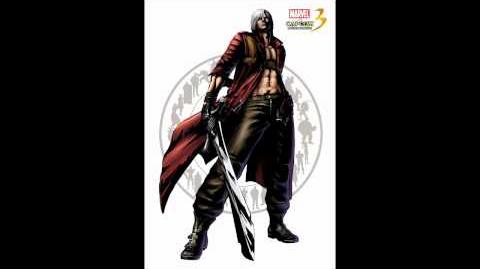