You were recording that, weren't you player? No? Heh heh...WHAT DO YOU MEAN YOU WEREN'T RECORDING THAT?!

Deadpool, real name Wade Winston Wilson, is a character from the Marvel Comics. He is a mercenary who gained a powerful regenerative healing factor after the Weapon X's addition of Wolverine's healing factor bonded to his cancer. He is known for his comedic personality and tendency to break the fourth wall.

See also: Deadpool's alternate costumes in MvC3, or in UMvC3

Deadpool wears a red and black jumpsuit with large oval shapes around the eyes and a logo, bearing his likeness, on his belt buckle. People unfamiliar with Deadpool often confuse him for "a ninja Spider-Man," much to the chagrin of his fanbase (as well as Deadpool himself).

Deadpool wears a utility belt around his waist that holds assorted weapons like handguns, knives and grenades, and many useless trinkets as well, like a toy monkey. His teleporter is incorporated into his utility belt, represented as a small, solid metal gadget that takes the shape of his trademark logo. He wears a harness around his upper body that keeps his two katana fastened to his back in an X-shape.

Underneath his costume, Deadpool is scarred and deformed (which is the reason why he keeps his mask on). His appearance varies from being rigid, lumpy, scarred, or exposed muscle and bone. However, this could be justified due to the fact his healing factor has his body in a constant state of flux.

Deadpool is a highly unstable individual due to the side effects of his vast healing power, so his personality changes from time to time. He frequently displays multiple potential mental disorders, including: attention deficit hyperactive disorder, maniac depression disorder, and recently the onset of schizophrenia.

He seems to be in love with himself, and thinks that many women will find him irresistibly attractive, despite often calling himself hideous. At some points, Deadpool can be very defensive about his looks, becoming extremely enraged when someone takes his mask. He can also become enraged from other things, like when his friend Weasel was in his house visiting Deadpool's prisoner and friend Blind Al, or when someone tries to eat the last cheesy puff (something for which he had stabbed Weasel in the leg). Recently, his anger towards others for seeing his true face seems to have mellowed significantly, with Deadpool removing his mask in front of other people on a regular basis (mainly to show them why he wears it).

Deadpool is always wacky, often blurting out random words and various pop-culture references at the most inopportune times, e.g. using his favorite word "Chimichanga" or trying to ponder the status of the Olsen twins. This severely annoys people around him, including Galactus, who once hired him as a herald but fired him for it. Even Spider-Man, who is infamous for his own wisecracks and non-stop talking, can't seem to tolerate Deadpool.

He also has two voices in his head that he converses with regularly. Deadpool speaks using his yellow speech balloons, the first voice talks with a yellow box with handwritten text, and the second voice uses a white box with typed-in text. They comment on Deadpool's every move, much to his annoyance. This white box has since been phased out entirely ever since it was revealed to be a manifestation of Madcap, an insane, reality-warping villain who had been seemingly killed by Deadpool, but actually found himself merged with the mercenary's consciousness.

Deadpool is a relatively fast character with good ranged and close quarters attacks. His specials include firing his guns rapidly at the opponent, and doing a series of slashes targeting the opponent. His support attacks included jumping in and firing a full-auto burst at the opponent. Also, he even copied one of Ryu's attacks, Shouryuuken, which he in fact demonstrated in one of his comics. 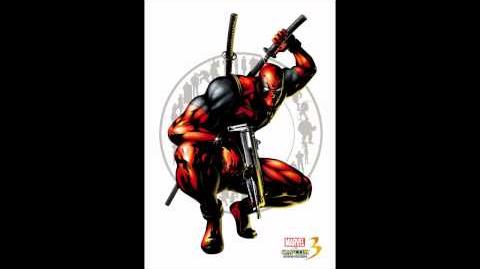