Marvel vs. Capcom Wiki
Register
Don't have an account?
Sign In
Advertisement
in: Dhalsim, Capcom Characters, Characters in X-Men vs. Street Fighter,
and 3 more
English

Street Fighter series
Dhalsim is a character from the Street Fighter series by Capcom. Hailing from India, he is a mystic skilled in the art of Yoga and can manipulate fire with his breath. His Yoga training also allows him to extend his limbs to extreme and unnatural lengths.

Dhalsim is often depicted as having pupil-less eyes. His build is that of a normal man who exercises and weight trains regularly except for his abdomen and waist which appear much out of proportion and emaciated. He wears torn saffron shorts as his only clothing attire as well as saffron wristbands and anklebands. He has three colored stripes adorning his head, and in the Street Fighter Alpha series, he wears a turban that he removes before battle. The skulls he wears around his neck are those of village children that died during a plague. In palette swap renditions of Dhalsim, his skin is often dark blue or other unnatural colors. He is the oldest of the original World Warriors.

Dhalsim is deep in meditation then opens his eyes and realizes that he is dreaming. At the dinner table, he is eating Indian curry with his wife and child. He tries to tell her about his dream but is silenced for the food will get cold.

Dhalsim is the original long-range fighter of fighting games. Dhalsim's intense training has given him the ability to contort and extend his limbs into forms physically impossible in real life; he can project his arms and legs outward in order to deliver attacks that would be out of the range of normal limbs. Dhalsim's fighting style involves keeping the opponent at bay with distance attacks and projectiles, and optimally, only getting close to strike with a surprise aerial attack or sliding kick. Due to his reach advantage, Dhalsim has both very low offense and defense, making it vital for him to avoid sustaining too many blows from a strong fighter. Dhalsim's sprite, while standing, is actually quite a small target, due to the total number of pixels Dhalsim's sprite occupies while not attacking. Dhalsim becomes a much larger target while attacking. As of Super Street Fighter II Turbo, the player can make Dhalsim do only short range attacks by holding back on the joystick. 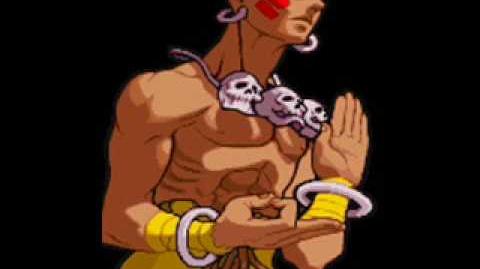 Dhalsim's moves in Marvel vs. Capcom 2: New Age of Heroes