Doctor Victor von Doom (ドクター・ヴィクター・ヴォン・ドゥーム, Dokutā Vikutā von Dūmu?) is a character from the Fantastic Four series by Marvel. He is the monarch of Latveria and the primary enemy of the Fantastic Four. He is a brilliant inventor and scientist, and one of the most powerful sorcerers in existence.

Doctor Doom is a scarred individual who hides his imperfection underneath his armor, of which is almost medieval-like in style, but with hidden high-tech weapons inside, rivaling that of Iron Man's suit. Over the armor, he wears a green tunic with a long, flowing cape and a hood. On top of his tunic is a large brown belt with a holster for a high-tech gun.

Doom is an extremely vain individual, and despises Mr. Fantastic for being one of the few rivals to his genius. Some accounts say the explosion of his machine only caused one scar, which he could not handle, as "Doom should be perfect". While his face under the mask was revealed to be hideously scarred in Secret Wars, it is not known whether those scars are a result from the explosion or from impatiently first trying on his armor while it was still hot from the forge. He also places his own importance over others, and has no problem killing people when the situation calls for it, regarding life much like a game of chess. He similarly equates all of his evil deeds to "pruning weeds in order let an orchid flourish."

In spite of this however, Doctor Doom is a gentleman and is bound by his honor and pride. He seems to value science heavily, preferring to build machines that have the same function as some of his magic spells. The only people he's seemed to ever care for are his parents, vowing to avenge them once they were gone, and going to great lengths to reach whatever dimension his mother is trapped in, having eventually succeeded in freeing her soul with Doctor Strange's help. Another person for whom he has a soft spot is Reed Richards and Sue Storm's daughter, Valeria, whom Doom delivered on the condition he got to name the child.

Although a major threat to the Marvel universe, Doom can also prove a valuable ally. He has been seen to team up with numerous superheroes on a few occasions, even his arch-rivals, the Fantastic Four. In most cases however, the alliance works in Doom's favor, and he will often abandon the person as soon as he gets what he wants. Such as when he helped defeat the god-like Beyonder, only for his plan to involve stealing the Beyonder's powers.

Doctor Doom defeats Thanos and gains the Infinity Stones. He uses it to create the "Age of Doom."

Doctor Doom secretly absorbs some of Galactus's cosmic power after the battle, making him stronger than ever before, as he claims the "Age of Doom" has begun.

With a wide variety of projectiles, Dr. Doom is a very defense-oriented character. His gameplay consists of constant poking with projectiles, putting his opponents off balance so he can attack them in close range. He's a great assist character, as all of his assists can be easily chained with other characters' attacks and projectiles. 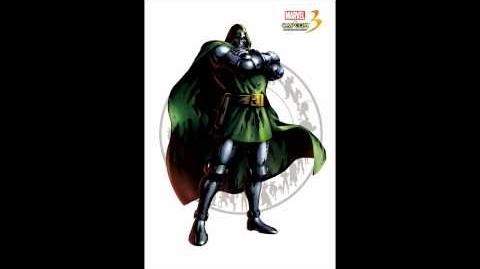