Edit
watch 03:29
'Marvel vs. Capcom: Infinite' – Doctor Strange Tutorial
Do you like this video?
Play Sound

One does not require the Eye of Agamotto to see this outcome.

Doctor Strange (Spoken before a match)

Doctor Stephen Vincent Strange (ドクター・スティーブ・ヴィンセント・ンストレンジ, Dokutā Sutībun Binsento Sutorenji?) is the main character of the Strange Tales series by Marvel Comics. He was a brilliant but arrogant surgeon before surviving a car accident that severely damaged his hands. He trained under the Ancient One and used his mastery of the mystic arts to protect the Earth.

Dr. Strange is a very distinguished-looking man. He has black hair, that is graying at the sides, and a mustache. His odd looking ensemble is chosen very deliberately, as each article of clothing serves a magical purpose. For example, his cape, the Cloak of Levitation, allows him to fly, and his medallion, the Eye of Agamotto, is one of the most powerful magical artifacts in existence.

Dr. Strange is kind, and always willing to help others in need, especially if their problem is mystical in nature. He can sometimes become wrapped up in his work, but this may be for the best, as his work is sometimes more important than what other heroes need him for. Dr. Strange is very accepting and patient, as seen when he created the Defenders, a team of loners that included Hulk, Namor, and the Silver Surfer. Hulk and Namor usually bickered, but Dr. Strange tolerated it to work for the greater good.

Dr. Strange possesses many powers and abilities, though not all may be seen in-game. They include:

Doctor Strange appears as a cameo in Hsien-Ko's ending. He frees the sisters of their bond and resurrects their mother. However, this ending is all made up by Hsien-Ko in a comic book that she drew. This ending was removed from Ultimate.

Doctor Strange holds a meeting in his Sanctum Sanctorum with magic-users from both the Marvel and Capcom universes to discuss how to prevent another Galactus-type incident. Seated at the table are Doctor Druid, Brother Voodoo, Scarlet Witch, Wiccan, Donovan Baine, Tessa, Gar, Gambit and others.

Doctor Strange is a large, slow character, but has many specials and features that help him move around the screen. He can normal cancel his wave dash, and has multiple tracking teleports. Doctor Strange's main strength is his zoning versatility, and all of his Hyper attacks have very good range. 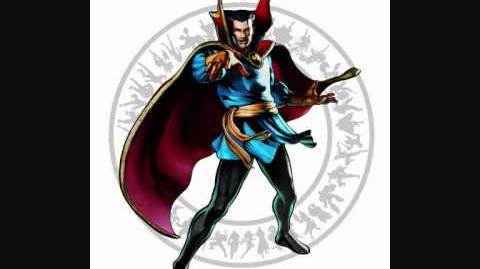