Wow! I love your claws!

Felicia is a character from the Darkstalkers series by Capcom. She is a catwoman who dreams of becoming a musical star to bridge the gap between Darkstalkers and humans.

See also: Felicia's alternate costumes in MvC3, or in UMvC3

Felicia's ending involves her partaking in a musical tour with Dazzler of the X-Men called the "Cat Scratch Savior."

Felicia is a rushdown character relying on speed and combos to take her opponents apart. She is especially deadly when comboing on a cornered opponent. 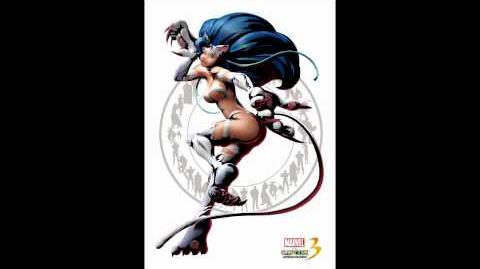 Marvel VS Capcom 3 - Felicia Theme
Marvel vs. Capcom 3: Fate of Two Worlds
Add a photo to this gallery

Felicia's moves in Marvel vs. Capcom 2: New Age of Heroes

Felicia's moves in Marvel vs. Capcom 3: Fate of Two Worlds

Retrieved from "https://marvelvscapcom.fandom.com/wiki/Felicia?oldid=74095"
Community content is available under CC-BY-SA unless otherwise noted.