Edit
watch 03:32
'Marvel vs. Capcom: Infinite' – Firebrand Tutorial
Do you like this video?
Play Sound

Hrruagh! (Translation: Come get some!)

Firebrand, known as Red Arremer in Japan, is the main character of Gargoyle's Quest, a spin-off of the Ghosts 'n Goblins series by Capcom. He is an elite warrior among the Red Arremers, a race of gargoyle-like demons. He is on a mission to eradicate any threat posed to his home, the Demon Village.

See also: Firebrand's alternate costumes in UMvC3, or in MvC:I

Firebrand is a red, gargoyle-like demon with wings that have spikes portruding from the top. His wings are dark blue with a silver lining. He wears silver bands on his wrists and ankles. His hands and feet have powerful claws, and he has sharp teeth in his mouth. His pointy ears extend upward.

Malevolent and cunning, Firebrand is fueled by his patriotism to the Makai and his love for battle. He gladly serves the devil Astaroth without any moral problems and enjoys hunting down and killing would-be heroes like Arthur. However, he takes deep pride in protecting his realm from tyrants like Breager.

Firebrand has many powers and abilities, including:

He appears in Dormammu's ending alongside Lord Raptor, Akuma, and Wesker. He is one of the followers of darkness that came out of the dimensional rift opened by Dormammu.

Firebrand's ending involves him now on the throne of Astaroth and commanding his forces. On the throne, he sees Arthur ready to hunt him down via crystal ball.

Firebrand is a character quick on his feet with attacks that usually motion him forward quickly. In the air, he is a true monster, attacking enemies airborne with extendable combos and thanks to his Hell Spitfire, Assists work well with him. Firebrand is also one of the few characters in the game whose enhancing Hyper allows him to build meter while active, allowing him to make extensive use of his Hyper Combos. 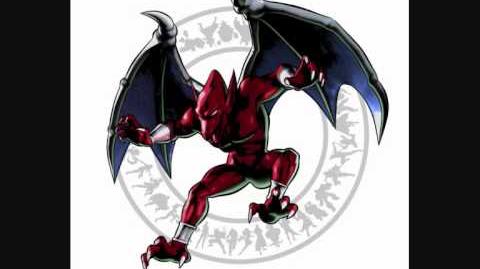