Edit
watch 03:11
'Marvel vs. Capcom: Infinite' – Frank West Tutorial
Do you like this video?
Play Sound

What do you mean I don't belong here? I've covered wars, y'know.

Francis Algernon "Frank" West is one of the main characters in the Dead Rising series by Capcom. He is a freelance photojournalist who went to Willamette looking for the "scoop of a lifetime", only to discover the first zombie outbreak in history.

The version of Frank present in this game resembles his appearance in the first Dead Rising, rather than the older Frank in Case West and Off the Record in Dead Rising 2. Instead of a young, beautiful protagonist present in many Japanese games, Frank was designed to look like an everyman.

Frank wears a suit jacket, a white buttoned shirt, green slacks, and brown shoes. His camera is hung around his neck.

Frank enjoys attention since his main motivation in the first game is to break the big story and become famous. However, he soon becomes more concerned with the people who survived the outbreak and require help. He is not a very serious person, as he has fun killing zombies in creative ways, but he still finds justice important, such as when he battles psychopaths who endanger innocent people, and when he tries to bring down Phenotrans. However, he can be a bit jealous, with the announcement video for the "What If?" story Dead Rising 2: Off the Record portraying him as a bit jealous that Chuck was the one to find out the story behind the Fortune City outbreak. In short, Frank's personality traits are very realistic, being complex enough to possess both positive and negative personality traits like a normal person would.

Although Frank himself does not possess any superhuman abilities, he is not powerless. Frank is very skilled, with abilities like:

Frank's ending has him looking into the Marvel Zombie universe with Mr Fantastic of the Fantastic Four. He then briefs Frank on the chaos going on in that world and requests his help in hopefully subduing it. Although Frank isn't too keen on fighting zombie superheroes, he willingly accepts the offer as he sees it as a huge scoop.

During the convergence, Frank has heard some really weird stuff from the past few weeks (Disappearances and Monster Sightings), He starts looking into it and deducts that everything is happening within the A.I.MBRELLA Corps. Facility. He spots Spider-Man and Chris and hides from them, but then is later caught by Spider-Man who knew he was being followed. Frank explains to Chris that this story could be the biggest of his career, but Chris rejects until Frank has said his famous quote "I've covered wars y'know?" and Chris lets him join.

When Frank is taking pictures of the B.O.Ws in their tubes, he notices that A.I.MBRELLA kidnapped New Metro's mayor Mike Haggar and put him in a tube. As Frank inspects to see if he is still alive, judging by the mayor's unaltered body, Haggar wakes up and breaks free, but mistaken Frank and the others to be his kidnapper. While Chris' team trying to calm the mayor down, Haggar starts choking out Frank while Frank is saying they're trying to rescue him. Haggar notices Spider-Man and lets go of Frank and tries to remember what has happened.

After confronting Nemesis and a couple of B.O.Ws, M.O.D.O.K. is defeated, but not long after something in the portal in front of him starts to unravel what is inside, Frank tries shutting it down with a baseball bat, but he fails and says something is forcing its way in. After discovering what came out of the portal, Spider-Man tells everyone to get out and run.

As Frank, Chris, Spider-Man, and Haggar escape the facility, it blows up and they see Jedah who notices that the Mind stone is nearby, an explosion then occurs to reveal a giant-symbiote like monster from the facility and the gang runs away from the giant beast. When Haggar asks how to stop it, Spider-Man says they are vulnerable to "High-Frequency Vibrations" (Like Church bells or signal generators). When Chris shoots a rocket at it, it barely hurts the monster and some of the symbiote has got onto Spider-Man's suit, turning him evil. Chris tells Haggar and Frank to help Spider-Man and that Chris will keep the monster busy. After defeating Spider-Man, Frank smashes a car window with a bat, causing the car alarm to go off and getting the symbiote off of Spider-Man, turning him back to normal and hurting the ears of the giant symbiote monster.

Frank appears at Stark's tower along with the other heroes after the symbiote monster is defeated and that they have to defeat Ultron-Sigma in order to cure themselves from the Sigma Virus, Frank is assigned to go with Iron-Man and Thanos to Able City to build a weapon to defeat Ultron-Sigma.

After Arriving to Able City, they reach Sigma's lab and Iron-Man suggests to look around to make sure Ultron-Sigma drones aren't around, Frank says "Amen to that" but then decides to stay with Iron-Man and Thanos to take some pictures to "Capture the moment." Iron-Man says "It's your funereal" allowing Frank to do so. After Iron-Man reveals his flashback to Thanos, Thanos suspects he's lying and needs the Time Stone to see for himself, Frank tries to tell Iron-Man that he's gone too far, but then Thanos attacks the 2 heroes. After defeating Thanos, they cheer, but not long before Thanos awakes and takes out the 2 without trouble. After Thanos has defeated the other heroes, he finishes building the weapon and takes Ryu's powers and leaves. After recovering, Dr. Strange appears and tells them to come with him, Iron-Man turns and tells his crew that it's "Time for their grand entrance." Frank and the rest of the gang enter the portal to X-Gard.

After defeating Ultron-Omega, Haggar questions why things haven't gone back to normal, Frank adds to this by saying that "Time rewinds, the universes separate, the dead come back to life, etc." Dr. Strange explains to them that the convergence was caused by the Space and Reality stone and that the Reality stone is cracked, making them unable to undo the convergence. Frank then leaves with the rest of the heroes out of X-Gard and back to Earth.

Frank is a heavy hitting melee character, being aggressive having more tools on hand to safely rushdown and/or play footsies. He has fast ground mobility and can pull off a variety of combos in close range, while using his Zombie-related moves as a distraction to either control space or extend combos. While he also possesses above average health, he lacks air mobility and more than one full-screen screen projectile.

Frank's character theme is a remix of Adam MacIntyre's theme in Dead Rising. 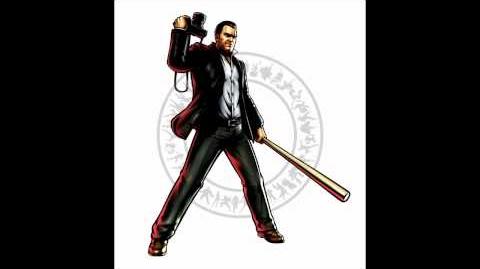