Galactus, the Devourer of Worlds, once known as Galan, is a character from the Fantastic Four series, and Silver Surfer solo series by Marvel. He is an incarnation of the Multiverse, having near limitless godlike powers that came from the planets he has comsumed.

Galactus possesses the immeasurable Power Cosmic and is one of the most powerful beings in the Marvel Universe, he has even been referred to as "the most powerful creature in the universe." As such, Galactus is able to employ the limitless cosmic energy within him to produce virtually any effect he desires.

In the Marvel Universe, Doctor Doom teamed up with Dormammu and reunited a large number of known villains.

Soon, they made contact with the Capcom Universe, and joined forces with Wesker in order to unite both "Earths" into one. Galactus took notice and, in his mind, sees no other alternative but to destroy the world to prevent the catastrophe. The heroes and villains now must team up to defeat this new larger threat, or else lose everything.

Galactus is the final boss in the game, occurring in Stage 7.

Should the player's team be defeated, the words "Earth K.O.,", in which the announcer would say "Global Destruction! K.O.!", followed by "You Lose," are shown, signifying that the player has doomed both the Marvel and Capcom worlds to destruction. After the player's team is defeated, an animation shows Galactus standing before a burning Earth, before making it explode. However, if the player's team triumphs over Galactus, the words "You Saved The Earth!", followed by "You Win", show up instead, with Galactus falling off the stage's crater and fleeing in defeat, thus saving both the Capcom and Marvel worlds, followed by a fighter's victory animation for delivering the final blow, along with the ending of that particular fighter. In both MVC3 and UMVC3, after losing to Galactus and choosing not to continue, his ending will play after the Game Over screen. 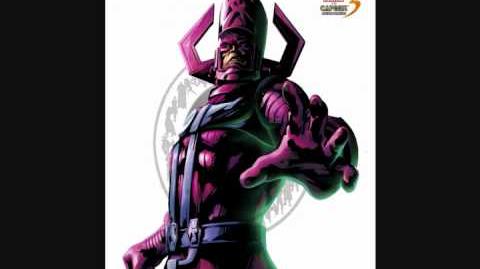 Ending
Add a photo to this gallery

Marvel vs. Capcom 3: Fate of Two Worlds
Retrieved from "https://marvelvscapcom.fandom.com/wiki/Galactus?oldid=77193"
Community content is available under CC-BY-SA unless otherwise noted.