Edit
watch 03:24
'Marvel vs. Capcom: Infinite' – Ghost Rider Tutorial
Do you like this video?
Play Sound

Hell hath no fury like a flaming skeleton on a motorcycle.

Ghost Rider, real name Johnathon "Johnny" Blaze, is a character from the Marvel Comics. He was a motorcycle stuntman who was bound to the Spirit of Vengeance Zarathos. He roams the world, seeking vengeance against the souls of those who would do harm.

In his Ghost Rider form, Johnny Blaze takes the shape of a skeletal demon with a perpetually burning skull. He wears classic biker gear; a leather jacket and leather pants with gloves and boots. Spikes run across his wrists, shoulders, and ankles. His penance chain is wrapped around his shoulder when not in use but in times of battle, he will unravel and place it around his hand.

Ghost Rider is not overly concerned with the struggles of traditional heroes and villains, focusing more on demonic threats to the universe. However, he will occasionally aid Earth's heroes if he feels the problem is important enough. Ghost Rider believes in righteousness and vengeance, punishing those who are guilty. Although he is serious, the Johnny Blaze portion of him shines through with the brief bits of humor, as shown in his quotes. Part of him wishes to be free of Zarathos, and return to being the regular Johnny Blaze.

The Ghost Rider is one of the strongest and most powerful supernatural entities in the Marvel Universe. As the Ghost Rider, Johnny Blaze has many demonic abilities at his disposal, though not all of them may appear in-game.

Ghost Rider's ending have him capturing Mephisto with Dante and Trish by his side with the former wanting to cut off Mephisto's head and the latter telling him that she will tear up his contract with Ghost Rider.

Ghost Rider's role in the story primarily takes place in the Dark Kingdom and is heavily focused on taking down Jedah, alongside Dante. Sometimes in 88 days ago after the convergence, Ghost Rider and Dante met each other while doing their similar evil demon hunting business, prior Dante being called to aid their fellow heroes against Ultron Sigma.

When the battle against Ultron Sigma occurs 88 days later, Ghost Rider sensed over one million souls being sacrificed and gathered inside the Dark Kingdom, and began tracking the one who responsible for this cause. He comes across Morrigan, who tries to tempt Ghost Rider to fall for her charms and even tries to make him do the Penance Stare on her. Ghost Rider, however, replies that she may have many sins of stealing some souls, but is not responsible on this recent soul stealing causes, while resisting her charms. Morrigan, however, isn't too pleased with this and fights Ghost Rider to in order to get him seduced, much to Ghost Rider's chargin.

Doctor Strange, Dante and Arthur then arrives and puts a stop to their fight while revealing the need to find the Soul Stone. Morrigan then leads them to Jedah, who has the Soul Stone and is also the one Ghost Rider is looking for. After the defeat of Dormammu and Firebrand, Jedah retreats while still in possession of Soul Stone. Ghost Rider and Morrigan joins the other heroes to try and take down Jedah, and later Ultron Sigma.

Ghost Rider is primarily a hard-hitter with frightening reach. Using his hellfire-empowered chain, Ghost Rider stands his ground and controls space with his attacks rather than with his mobility; safely poking his foes at a distance, and reeling them in closer for serious damage. His full combos that start from mid-screen do more overall damage than his combos that start from close up. He has no normals or specials that reach full-screen, so it's best to team him with assists that reach full-screen to make him a threat at any range. Ghost Rider has no special mobility whatsoever other than his Spirit of Vengeance hyper which lets him drive around the stage for a short time and has hyper armor. Because of his whip-like attacks, he has often been compared to Omega Red, another character who uses a whip-like apparatus to attack enemies from afar. 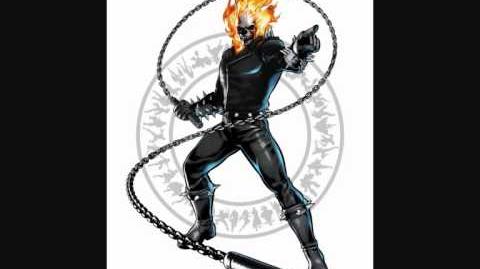