Guile is a playable character in Marvel vs. Capcom 2: New Age of Heroes.

Early Street Fighter II sketches and notes suggest that Guile was developed specifically to appeal to American fans. His physical appearance is strikingly different from the many Asian characters in the Street Fighter series, with eyebrows-less light blue eyes that always have a creepy stare, a chiseled jaw, and a particularly tall flattop haircut. The length of Guile's hair varies greatly from appearance to appearance. It is relatively realistic in Street Fighter II, and impossibly tall in SVC Chaos: SNK vs. Capcom. Yanagiya's J-GEL hair gel advertising campaign reveals that Guile keeps his hair pinned up (though he still always ends up fixing it quickly after each fight) because he uses exaggerated amounts of gel.

Another way Guile's image differs from the Asian combatants in the series is his Flag of the United States tattoos. Currently, he has one on each deltoid, which is a retcon from the initial one he had in Street Fighter II artwork (due to sprites in most videogames being forced to be symmetrical).

Guile is also characterized by his big muscles, his deep voice and his permanent expression of bad mood, which make him intimidating. He appears wearing a green sleeveless shirt, wide camouflage pants and brown/black boots. He carries Charlie Nash's dog tags with his own, hanging on his neck (although he returns them to him in Street Fighter V). Speaking of Street Fighter V, his classic appearance no longer his main costume, but as nostalgic costume in that sixth Street Fighter mainline game.

Guile is one of the few warriors that voluntarily engages in the war against Abyss, after learning that his friends were dragged into the battlefield along with fearsome villains like M. Bison, Magneto and Doctor Doom. There he helps to finish the terrible entity and then returns to his world in Partenaire, Ruby Heart's flying ship. During the return trip he happily talks with Captain America.

Guile is generally considered a middle tier character in the Marvel vs. Capcom series. Guile is the first of many characters to introduce the "charge" gameplay style, in that a player must hold in a direction for a few seconds and press in the other afterwards to pull off a special move. This type of gameplay can make Guile a defensive character. Because of the short lag after his Sonic Boom, though, he can follow it and use his various forward-moving attacks to pressure the enemy, which makes him offensively very powerful as well. However, learning how to implement his specials into combos makes it a real challenge; Guile often requires patience and opprotunity to ultilize properly. 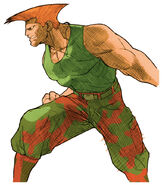 Guile with Captain America, Jill, and Psylocke in the ending

Guile with Captain America, Captain Commando, and Gambit in the ending