Edit
watch 03:30
'Marvel vs. Capcom: Infinite' – Haggar Tutorial
Do you like this video?
Play Sound

See also: Haggar's alternate costumes in MvC3, in UMvC3, or in MvC:I

Haggar is seen in the White House, his political career having skyrocketed after he defeated Galactus and became elected the President of the United States of America, with Tony Stark as the Vice-President. Captain America and Chris Redfield are shown visiting him, making sure everything is okay. Haggar then goes on to explain his faith in the people of America and why he was chosen to be President.

Haggar is popular for his wrestling/street-brawling fighting style. That being said, all of his moves are based from the aforementioned style. He's also much of a contact bruiser like Hulk, for he is not as quick as the rushdown characters in the game. However, it's safe to say that Haggar is more combo oriented, as some of his throws create openings and combo extentions in addition to inflicting damage, and they are also good for punishing and wakeups.

However, his Double Lariat move that predated Zangief's fame is rather like Maki's Reppuukyaku (Gale Leg) from Capcom vs. SNK 2 in that like the original Final Fight series, as his Megacrash it inflicts damage to Haggar himself, but packs a good amount of invincibility, making it one of the best assists in the game despite its drawback. His crouching H/C is a drop kick, which seems to count as an untechable knockdown on Haggar himself, and thus he must be careful when using it (though he can get-up via a tech roll to plan some strange possible mindgames). All of his jumping normals save for his j.S all stay active till Haggar lands, and his standing H/C causes a ground bounce. 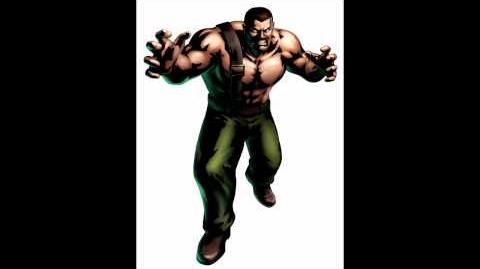 Haggar's moves in Marvel vs. Capcom 3: Fate of Two Worlds