Edit
watch 03:13
'Marvel vs. Capcom: Infinite' - Hawkeye Tutorial
Do you like this video?
Play Sound

Hawkeye, real name Clinton Francis "Clint" Barton, is a character from the Avengers series by Marvel Comics. He is an expert marksman and master archer, and a member of the East Coast and West Coast branches of the Avengers.

See also: Hawkeye's alternate costumes in UMvC3, or in MvC:I

Underneath his costume, Hawkeye has blonde hair and blue eyes. His classic costume has a purple cowl with eyes resembling Wolverine's mask, and a giant "H" on his forehead. His shirt is sleeveless but has a few armbands. Most of his costume resembles a typical superhero jumpsuit, but it includes large pieces of cloth from his torso reaching past it below his belt. His boots are cuffed at the tops like Captain America. On his back, Hawkeye carries a quiver full of many trick arrows. His new costume ditches the cowl for a pair of shades, and the suit is now black with purple details, including a downward-pointing arrow motif at the chest.

Hawkeye is naturally rebellious and confrontational. These qualities have often put him at odds with his fellow Avengers, but he usually sets aside these differences to operate more smoothly in battle. Hawkeye can seem overconfident and brash, but as his in-game quote says "You're not brash if you can back it up." This quote may just reinforce his reputation as brash. He is quick to anger, and always voices his opinion, even when it may have negative consequences. During his happier times, he enjoys joking around in battle, poking fun at his allies and enemies alike.

Hawkeye does not possess any true superpowers, but his abilities far surpass the average human, such as:

Hawkeye's role in the story primarily takes place in the Avengers Tower. Prior to this, he was with the heroes taking down Xgardians and Ultron Drones in XGard, and competed with Dante on who could take the most down.

At Avengers Tower, Hawkeye teamed up with Arthur to try and contain Thor after the God of Thunder was taken over by the Sigma Virus.

Afterwards, Hawkeye remained on lookout on Avengers Tower to warn Spencer and Iron Man of Ultron Sigma's incoming forces. Afterwards, he joined the heroes in the final battle against Ultron Sigma.

Hawkeye can fill the screen with projectiles to keep out even the best of rushdown. He has all the tools a keepaway character could want, ranging from angled shots, projectile normal attacks, and a tracking arrow hyper, making him one of the best zoners in the game. Not only are his arrows quick, but they also have OTG properties. What separates him from similar characters are that his arrows possess special status effects, such as causing major hitstun or even inflicting poison. In addition, his melee normals are all very solid. At a range, hes a menace, but up close, he can combo with the best of them. 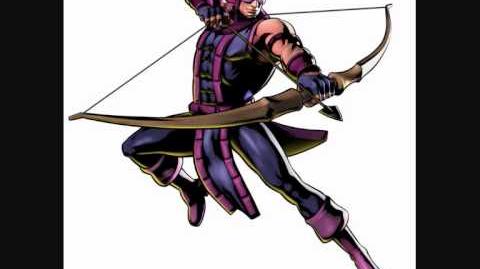