Marvel vs. Capcom Wiki
Register
Don't have an account?
Sign In
Advertisement
in: Iceman, Marvel Characters, Characters in X-Men: Children of the Atom,
and 2 more
English

X-Men series
Iceman, real name Robert Louis "Bobby" Drake for short, is a character from the X-Men series by Marvel. He is a mutant who can manipulate ice and cold by freezing water vapor around him, allowing him to freeze objects, as well as turn his body into ice.

Robert "Bobby" Louis Drake, aka Iceman, is a mutant with the ability to lower both his external and internal body temperature, thereby radiating intense cold from his body. He is capable of lowering the temperature to -105 degrees Farenheit, although he was able to reach absolute zero when Human Torch drew all of the ambient heat away from him.

His most commonly known ability is the power to create unusually hard ice constructs, such as slides, shields, ladders, bats, etc. He is able to alter the appearance of his ice form, reconstruct any part of himself that has been shattered, and enhance his strength and durability, all by using the water molecules in the air. Like Colossus, Bobby can switch between ice and human form at will.

Finally, he has the ability to travel through bodies of water by merging his molecules with the water.

After Magneto's defeat, Iceman escapes with the other X-Men as Avalon collapses. In the spaceship, he ponders about Magneto's survival. He also says that he'll wait about it on the beach. On the beach, he creates an ice sculpture for the women and children. The sculptures are different each time, and can vary from villains to women.

In the ending, Iceman is seen with Zangief. Depending on the platform, the third character is either Tron Bonne with the Servbots or Baby Bonnie Hood. 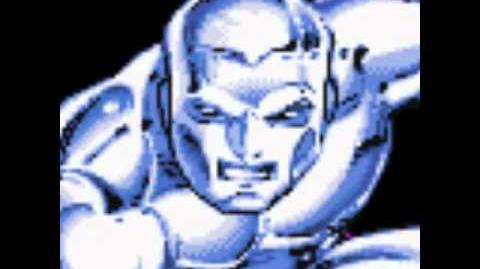 X-Men COTA OST Ice On The Beach (Theme of Iceman)
X-Men: Children of the Atom

Iceman's moves in Marvel vs. Capcom 2: New Age of Heroes