Edit
watch 03:16
'Marvel vs. Capcom: Infinite' – Iron Man Tutorial
Do you like this video?
Play Sound

What part of "Invincible Iron Man" didn't you understand?

Iron Man, real name Anthony Edward "Tony" Stark, is a superhero from the Marvel Comics. He is a genius inventor and CEO of Stark Industries. He built an advanced armored suit, capable of firing photon blasts and serving as his heart replacement.

Iron Man debuted in Marvel Super Heroes and has appeared in every game in the series since Marvel vs. Capcom 2: New Age of Heroes.

See also: Iron Man's alternate costumes in MvC3, in UMvC3, or in MvC:I

Tony Stark is a tall man, with black hair and a goatee. His Modular Armor is a clunky, red, and gold armor with a glowing pentagon in the center of the chest. The new Extremis armor is much more sleek, but shares the same basic design. The most notable appearance is that his chest crystal is now triangular instead of circular.

Iron Man is a noble hero that will do anything if he believes it will help people, which is why he went along with the Superhuman Registration Act. However, he has also been portrayed as a somewhat selfish womanizer. In the past, he has struggled with alcohol; a struggle that almost ruined his life. He has successfully not drank a sip of alcohol since his victory over his problem.

Tony is a friendly man, and is very generous. Because of his high economic status, he often offers job positions to his fellow heroes. Much like his friend, Steve Rogers, Iron Man can be very stubborn when supporting something, such as in the case of the superhero Civil War.

Other than Tony Stark's genius level intellect, his physical capabilities are similar to those of an average human. All of his powers come from his many variants of Iron Man armor, which all have some common abilities such as:

Notably, being infected with a relatively benign form of the Extremis virus allows him to quickly don his Extremis armor at will via skin secretion. In addition, this virus has greatly enhanced Stark's reflexes and has given him the ability to neurally interface with and manipulate many forms of technology from great distances, even when not wearing his armor.

After Thanos's defeat, Iron Man was tempted and eventually succumbed to the power of the Infinity Gems. He healed his nervous system. He tells Captain America that he isn't as strong as he thinks he is. To which, the soldier replies that he is human.

Iron Man's Avengers Tower is one of the central places of rendezvous between the heroes (and the place of communications with Dr. Light) and is also the place where Thanos is being held captive after being taken away from A.I.M.BRELLA. Conflict between the heroes rise after they can't seem to agree on trusting Thanos, forcing a Civil War-esque dispute between Iron Man (with Chun-Li), who thinks it's too risky to trust Thanos, and Captain America (with Dante), who thinks that trusting him is the only option left.

After destroying the Symbiote with the aid of X & Zero, the Time Stone reveals to Iron Man a flashback that exposes to Iron Man that Thanos was merely used and played by Death to aid her with Jedah's plan. He keeps this to himself, until he fumbles this to Thanos, thinking that he knew. This utterly angers Thanos and he engages with Iron Man and Frank West in a fight, intending to take the stone away from them to find out for himself. He ultimately does find out that it's true, angering him even more. Thanos takes down Gamora and steals the Satsui no Hado from Ryu, however, he does keep his end of the bargain and finishes the device and leaves Iron Man and Gamora the Time Stone, seeing as he has no use of it. Iron Man then leaves with Doctor Strange with the weapon to finish Ultron Sigma.

Witnessing Ultron Omega being weakened by Dante, Thor, Captain Marvel and X, Iron Man summons the Infinity Buster and gives it to X. With the aid of Doctor Strange & Morrigan, Iron Man's Infinity Buster was able to be fired by X into Ultron Omega, finally destroying the monstrous dictator. Iron Man is seen with the other heroes leaving Xgard, contemplating on what to do on rebuilding the newly forged universe between Marvel and Capcom.

Iron Man is a jack-of-all-trades character suitable for beginners, able to operate with both keep-away and rushdown strategies with reasonable effectiveness. He is reasonably fast and agile, and possesses a modest amount of health. However, his leaning curve is high due to lack of defensive escape options, lack of grounded mixups outside zoning, easy-punishable attacks and difficult combo executions. Learning to use Iron Man well usually needs to take time. 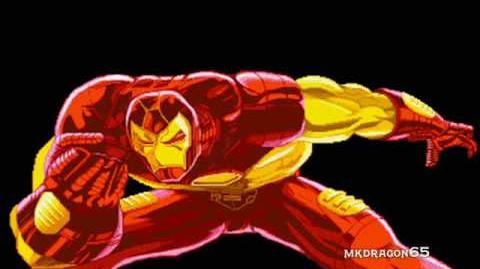 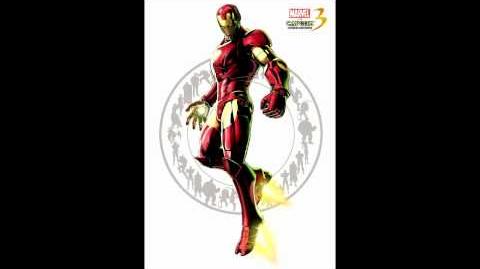