Start a Wiki
watch 03:16
'Marvel vs. Capcom: Infinite' – Iron Man Tutorial
Do you like this video?

What part of "Invincible Iron Man" didn't you understand?

Tony Stark was born a mechanical genius. After his parents died, he took over his family's company Stark Industries, which manufactured weapons. Enjoying women and alcohol, Stark didn't seem to care much for the rest of the world, until he was kidnapped by terrorists using weapons of his design. They commanded him to build them a weapon with the help of Professor Yinsen, another scientist kidnapped by them. Instead of a weapon, they took their time to build something to help them escape: a suit of powered armor. Stark used this armor to break out of confinement, but Yinsen was killed during their attempt. Stark decided that using this armor, he would make up for his past sins and help the world. He was rescued and brought back to the US by James "Rhodey" Rhodes, who would later become Stark's pilot and the hero War Machine after Stark gave him his own armor.

Over the years, Tony Stark has been constantly refining his armor to keep up to date with the times. Also, he became a founding member of the Avengers, a team of superheroes including himself, Thor, Hulk, Giant Man, and Wasp. Hulk quickly quit the group and was replaced by Captain America, who became Stark's close friend. Their friendship was put to the test during the Superhero Civil War over registering secret identities with the government, where Iron Man became the poster-child for Registration and Captain America started a resistance movement. Recently, after the government was taken control of by the villain Norman Osborn and all heroes had to work together to fight him, the heroes of the world put aside their differences and the act was repealed.

Tony Stark is 6'1 and 225 pounds with black hair and a goatee. When in armor, he rises to 6'6 and gains an extra 400 pounds. His Modular Armor is a clunky, red and gold armor with a glowing pentagon in the center of the chest. The new Extremis armor is much more sleek, but shares the same basic design. The most notable appearance is that his chest crystal is now triangular instead of circular.

Other than Tony Stark's genius level intellect, his physical capabilities are similiar to those of an average human. All of his powers come from his many variants of Iron Man armor, which all have some common abilities such as:

Notably, being infected with a relatively benign form of the Extremis virus allows him to quickly don his Extremis armor at will via skin secretion. In addition, this virus has greatly enhanced Stark's reflexes and has given him the ability to neurally interface with and manipulate many forms of technology from great distances, even when not wearing his armor.

Iron Man is a noble hero that will do anything if he believes it will help people, which is why he went along with the Superhuman Registration Act. However, he has also been portrayed as a somewhat selfish womanizer. In the past, he has struggled with alcohol; a struggle that almost ruined his life. He has successfully not drank a sip of alcohol since his victory over his problem.

Tony is a friendly man, and is very generous. Because of his high economic status, he often offers job positions to his fellow heroes. Much like his friend, Steve Rogers, Iron Man can be very stubborn when supporting something, such as in the case of the superhero Civil War. 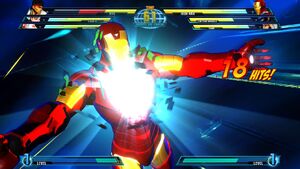 Iron Man is a projectile specialist, a very defensive keep away character. His Unibeam is great to keep a safe distance between him and the enemy, while Repulsor Blast punishes characters who can get in close combat with him. Not only that, Iron Man has your projectile and anti-air, being a good all-around starter type for most players (or a shoutouclone for that matter), along with great combos and close range situations. Like all veterans from the old Versus Games, his gameplay was refined, with a few gimmicks being fixed and other features being added. He gained slightly more mobility and resistance compared to his previous versions, as well more range in the energy attacks. To supplement his flight, he can now also air dash.

However, his real shining grace is his zoning ability; his Unibeam, Smart Bombs, and crouching HP/H are his main projectile attacks, and his standing MP/M, standing HP/H, crouching MK/M are great moves for pokes. His launcher however has low horizontal range where his air combos can be difficult to start up, but like with Wolverine's, it's great for anti-air poking. This gives Iron Man a strong and superior neutral game if one can easily counteract the foes' moves with the proper tactics Iron Man has up his disposal, scoring easy counter hits.

A joke in MVC2 was that he was called "Magneto Jr." due to having some nasty flight combos. They somehow still stay intact, and are less of a complaint due to the rebalanced cast, and Iron Man's changes. Also, his crouching HP/H now fires at the ground, and was one of the few projectile normal attacks in the series.

Ironically, despite his versatility in zoning and offense, Iron Man lacks strong defensive skills, as his escape options from blocking and his mixups to open up foes are weak without the use of his zoning. His combos tend to be one of the most difficult to master in the series, and often has a high leaning curve. Much of his attacks are also easy to punish at times despite his very strong neutral game, as Iron Man would often need to punish foes himself in order to play safe, and he must decide his options with careful judgment.

His crouching HP/H is also a projectile that fires a missile to the ground, but does not hit OTG.

In UMVC3, much of Iron Man's attacks and combo potential has been buffed, as well as his air dash being retweaked and slower at the startup, but a few more of his attacks become cancellable. However, at a cost he loses his double jump, but his jump attacks can now be air dash cancelled.

Changes in Ultimate Marvel vs. Capcom 3

In Marvel vs. Capcom Infinite

Iron Man was one of the first 6 characters to be revealed and the first Marvel character showcased. Iron Man retains the ability to cancel his jumping normals into his air dash but he also has some changes. Iron Man has a new move called Repulsor Ray where he shoots a beam from his hand in front of him moving him forward up to three times in quick succession. This can be done in the air as well and causes a wallbounce if the move hits the opponent while he/she is airborne. Smart Bomb has completely changed, now working like a mine and having keepaway properties instead of simply an OTG and can have two on the screen. Iron Man retains the two variations of Proton Cannon and Iron Avenger as his Hyper Combos for this game.

Role in Marvel vs. Capcom: Infinite

Iron Man is one of the main characters of the story. Iron Man's Avengers building is one of the central places of rendezvous between the heroes (and the place of communications with Dr. Light) and is also the place where Thanos is being held captive after being taken away from A.I.M.Brella. Conflict between the heroes rise after they can't seem to agree on trusting Thanos, forcing a Civil War-esque dispute between Iron Man (with Chun-Li), who thinks it's too risky to trust Thanos, and Captain America (with Dante), who thinks that trusting him is the only option left.

After destroying the Symbiote with the aid of X & Zero, the Time Stone reveals to Iron Man a flashback that exposes to Iron Man that Thanos was merely used and played by Death to aid her with Jedah's plan. He keeps this to himself, until he fumbles this to Thanos, thinking that he knew. This utterly angers Thanos and he engages with Iron Man and Frank West in a fight, intending to take the stone away from them to find out for himself. He ultimately does find out that it's true, angering him even more. Thanos takes down Gamora and steals the Satsui no Hado from Ryu, however, he does keep his end of the bargain and finishes the device and leaves Iron Man and Gamora the Time Stone, seeing as he has no use of it. Iron Man then leaves with Doctor Strange with the weapon to finish Ultron Sigma.

Witnessing Ultron Omega being weakened by Dante, Thor, Captain Marvel and X, Iron Man summons the Infinity Buster and gives it to X. With the aid of Doctor Strange & Morrigan, Iron Man's Infinity Buster was able to be fired by X into Ultron Omega, finally destroying the monstrous dictator. Iron Man is seen with the other heroes leaving Xgard, contemplating on what to do on rebuilding the newly forged universe between Marvel and Capcom.

Iron Man is a jack-of-all-trades character suitable for beginners, able to operate with both keep-away and rushdown strategies with reasonable effectiveness. He is reasonably fast and agile, and possesses a modest amount of health. However, his leaning curve is high due to lack of defensive escape options, lack of grounded mixups outside zoning, easy-punishable attacks and difficult combo executions. Learning to use Iron Man well usually needs to take time.

Iron Man's theme is a dance remix from War Machine's theme from Marvel vs. Capcom: Clash of Super Heroes.

Retrieved from "https://marvelvscapcom.fandom.com/wiki/Iron_Man?oldid=68530"
Community content is available under CC-BY-SA unless otherwise noted.