Marvel vs. Capcom Wiki
Register
Don't have an account?
Sign In
Advertisement
in: Juggernaut, Marvel Characters, Characters in X-Men: Children of the Atom,
and 5 more
English

No one tricks the Juggernaut! There won´t be enough of you left to bury.

The Juggernaut, real name Cain Marko, is a character from the X-Men series by Marvel. He is a mutate, a former human empowered by the Crimson Gem of Cyttorak, granting him nigh limitless strength, invulnerability, and force resistance.

When Cain Marko finds the Gem of the mystical entity Cyttorak, he is empowered with magical energies and transformed into an immortal avatar. As the Juggernaut, Marko possesses superhuman strength; being capable of shattering mountains, lifting and using buildings as weapons; extreme durability, which is also amplified by a mystical force field that grants near invulnerability. When the force field has been temporarily absorbed by Thor's Hammer, the Juggernaut's natural durability proved to be sufficient to exchange blows with Thor. The Juggernaut is described as physically unstoppable once in motion, does not tire from physical activity and is able to survive without food, water or oxygen.

The character, however, is vulnerable to mental attacks, such as psionics from beings like Jean Grey or Charles Xavior and magic from beings like Dr. Strange, a weakness that has been exploited via the removal of his helmet. The Juggernaut has circumvented this weakness by on occasion wearing a metal skullcap inside his main helmet. If the Juggernaut loses his helmet he can recreate it by touching certain materials (as long as he possesses the full power of the gem). Aside from magic, Dr. Strange can also counter the Juggernaut with the Crimson Bands of Cyttorak which, as their name implies, draw their power from the same entity who gives Juggernaut his power. It is possible for an opponent with sufficient physical strength of their own to turn the Juggernaut's irresistiblity against him, by redirecting his motion so he gets stranded in a position in which he has no purchase; both the Hulk and his son, Skaar, have managed this feat. Once, the entity Onslaught, which possessed unknowable psionic and reality-warping powers, somehow ripped the Crimson Gem out of the Juggernaut, subsequently trapping him inside.

The Juggernaut prepares to take the Infinite Gauntlet from the defeated Thanos, muttering threats towards his half-brother to himself. Before he can grab the gauntlet, Adam Warlock takes it, thanking the Juggernaut for stopping Thanos, but then warning that its power was not meant to be used by someone like him. Adam then sends the Juggernaut back to Earth with the gem's power.

After the Juggernaut defeats Apocalypse, he brags about his victory and tells the story about how he defeated the Hulk by outsmarting him.

The Juggernaut is a simple, straightforward and one-dimensional character. He easily has the highest per-hit damage output amongst the Marvel vs. Capcom 2 roster. Juggernaut has an excellent ground game. His light normals have surprisingly good range, speed, priority, and damage. His heavy normals do amazing damage but have a long after-lag. However, even his heavy normals have a long window to be canceled into special moves or Hyper combos; opening up possibilities of mindgames. On the ground, Juggernaut's permanent super armor allows him to absorb up to one hit without entering hitstun. Juggernaut's air combos are short and simple, but still fairly damaging.

Juggernaut has only one Hyper Combo, the Juggernaut Headcrush. The Headcrush is a highly damaging horizontal charge. Due to its priority, it can plow through similar attacks such as Captain America's Hyper Charging Star. Due to Juggernaut's super armor, it can absorb regular projectiles and beams without stopping. The Headcrush cannot go through hyper combo projectiles. The Juggernaut Headcrush has an extremely fast startup and movement speed once activated. It can knock out Iron Man out of the Proton Cannon from a fullscreen distance if both hypers are activated at the same time. 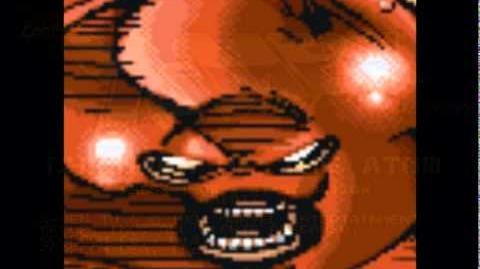 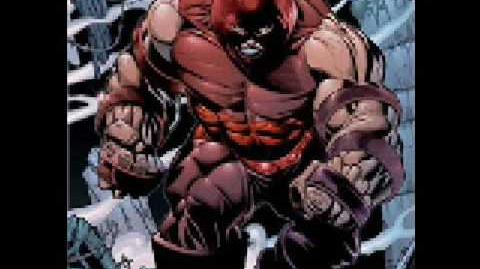