Marvel vs. Capcom Wiki
Register
Don't have an account?
Sign In
Advertisement
in: Ken, Capcom Characters, Characters in X-Men vs. Street Fighter,
and 2 more
English

X-Men vs. Street Fighter
Ken Masters is a prominent character the Street Fighter series by Capcom. He is a longtime best friend and main rival of Ryu, having the same goals and aspirations as him.

Ken's previous appearance in 2D era Marvel vs. Capcom games (excluding Marvel vs. Capcom: Clash of Super Heroes) was based on his younger design in the Street Fighter Alpha series. He has longer-length blond hair tied in a ponytail. He wears a red karate gi with torn sleeves, yellow gloves, and a black belt.

Ken is defeated by his son, Mel on a video game. Eliza calls the boys to dinner.

Ryu wakes Ken to inform him that Gouken is calling them for training and that the latter's gaming with Mel was but a dream.

Ken mainly focuses on the Shoryuken move, to the point where his Shoryukens set the opponent on fire. Ken's Tatsumaki Senpuukyaku does not allow him to dodge projectiles at the start of the spin, but spins faster, allows him to hit his opponent up to five times. Ken's Hadouken attacks are less concentrated than Ryu's, but Ken's Shoryuken has more range and does more damage than Ryu's. 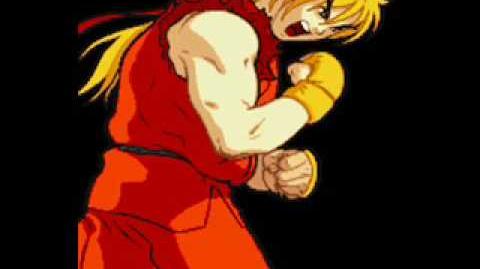