If you think I've evolved beyond the joys of murder, you'd be wrong!

M.O.D.O.K., real name George Tarleton, is a supervillain from the Marvel Comics, often appearing as an enemy of the Avengers. His name stands for Mental Organism Designed Only for Killing. He was a human genetically altered to become a super intelligent being, before becoming an evil mastermind.

M.O.D.O.K's ending shows him back at A.I.M., asking his workers to bring him an object hidden in a box, which turns out to be Galactus's full sized Helmet. Looking very humorous wearing it, he asks his workers what they think of it, but they are unsure what to say.

M.O.D.O.K. is the holder of Mind Stone, and presumably the head of a weaponized terrorist company fusion between an bio-organic company Umbrella and mechanical company A.I.M. known as A.I.M.BRELLA, as well as allying with the Dark Kingdom army consisting of Red Arremers and the monsters (including B.O.W.) infused with the stolen Venom Klyntar symbiotes led by the holders of the Soul Stone, Jedah and Dormammu.

M.O.D.O.K. is one of the most unique defensive characters in the game. His keepaway gameplay allows him to overpower enemies while keeping a safe distance. All his normals help with his defensive gameplay, exceeding in range; some causes large knockback and/or wall bound while others can multi-hit causing a lot of hitstun. 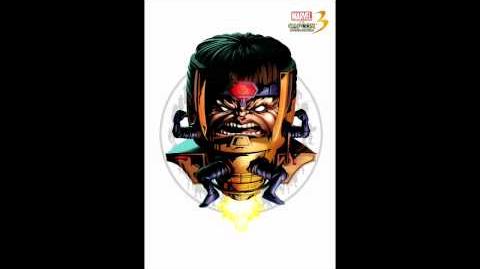