X-Men series
Marrow, real name Sarah Rushman, is a character from the X-Men series by Marvel. She is a mutant who can grow her bones out of her skin and use them as weapons and projectiles.

Marrow is a playable character in Marvel vs. Capcom 2: New Age of Heroes. 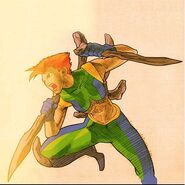 Hyper Combo and versus screen

Marrow labelled as "Slain" in Days of Future Past

Marrow's moves in Marvel vs Capcom 2: New Age of Heroes