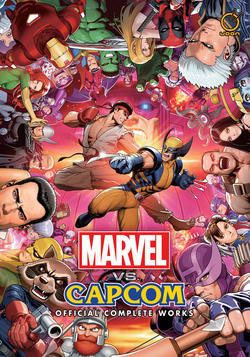 Marvel vs. Capcom: Official Complete Works is an art book that features all of the official artwork for the series that starts from The Punisher all the way to Ultimate Marvel vs. Capcom 3. It was made by UDON Entertainment and was released on July 2, 2012. An exclusive hardcover edition made its debut in San Diego Comic-Con on July 11, 2012 as an exclusive hardcover edition. There will be a standard-format softcover in late November 2012 by Diamond Comics.

Add a photo to this gallery
Retrieved from "https://marvelvscapcom.fandom.com/wiki/Marvel_vs._Capcom:_Official_Complete_Works?oldid=74296"
Community content is available under CC-BY-SA unless otherwise noted.