Those who live on the edge of the law hang out here.

The stage is located on a street of the city overlooking two buildings, both heavily covered in graffiti art made by the Mad Gear Gang. There are three police cars parked on the street and police officers confronting a number of Mad Gear criminals looking at the fight. The left side of the stage features a large pile of broken cars, trash containers and oil barrels, as well as a statue of the city's mayor Mike Haggar thrown on its side.

Poison can be spotted leaning on the police car on the far right side, looking at the battle. Mad Gear members Two.P and Bred are sitting in the middle car, cheering on the battle. The large Andore is seen standing above the third police car, moving around and roaring at two police officers trying to get him to come down. On the left side a green-hooded Two.P (possibly his palette swap, J) can be seen spray painting the broken statue, with another police officer calling at him. At times, this thug turns around and sprays paint on the officer, and then resumes his work. A second Poison (possibly Roxy) can also be seen sitting on the head of the statue, and several more thugs (another Two.P and the others with Bred's design) can be spotted cheering from the top or hanging at the sides of the buildings.

Days of Future Past Edit

Days of Future Past is the stage's alternate version introduced in Ultimate Marvel vs. Capcom 3. It is based on the Marvel event of same name that takes place in an alternate future where most mutants are killed or captured. This makes Metro City the only stage changed from a Capcom-themed stage in the original to a Marvel-themed stage in Ultimate, and one of the stages with the most number of changes.

The city is dark and in ruins, there are no people on the streets and only broken cars. There are two Sentinels in the background looking around the streets with spotlights and a broken Sentinel arm above a car. A single punk from Metro City continuously attempts to hang in a wall. There is a large wanted poster on the middle of the background, reminiscent of the one seen in the original event, but with characters from Marvel vs. Capcom 2: New Age of Heroes instead of mutants. There's a second poster on a broken wall at the left as well.

The characters in the poster are: 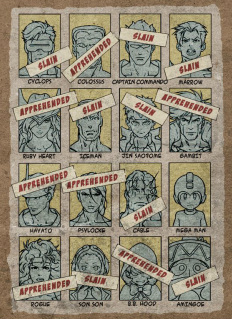 Metro City makes a return in Marvel vs. Capcom: Infinite as one of the merged stages known as "New Metro City", created following Ultron-Sigma's siege and fusing of the Capcom and Marvel universes. The stage is a combination of Metro City with New York City, a recurring location in Marvel comic books, and features an A.I.M.Brella (setting of another merged stage) and Avengers Tower in the background of each versions of stage.

Add a photo to this gallery
Retrieved from "https://marvelvscapcom.fandom.com/wiki/Metro_City?oldid=76788"
Community content is available under CC-BY-SA unless otherwise noted.