watch 03:22
'Marvel vs. Capcom: Infinite' – Nemesis Tutorial
Do you like this video?
Play Sound

Nemesis-T Type, or simply called Nemesis, is a character from the Resident Evil series by Capcom. It is a product of the successful combination of the NE-α parasite and the T-103 bioweapon.

See also: Nemesis's alternate costumes in UMvC3, or in MvC:I

Nemesis appears in Ultimate Marvel vs. Capcom 3 in its first form. Its face is stitched together over one eye, with the other eye glowing yellow. Nemesis has no lips, showing exposed gums and teeth. Nemesis wears a large, black jacket that almost conceals the tentacles wrapped around its neck. Nemesis also has black gloves, pants, and boots.

Nemesis has no true personality, only its mission. Nemesis' main goal is to eliminate all S.T.A.R.S. members (including B.S.A.A. in some game like in Project X Zone 2). Nemesis seems capable of speech, albeit very limited speech, only shown saying "S.T.A.R.S." ("B.S.A.A." in Project X Zone 2). Nemesis is ruthless and will take down anything in its way. Nemesis, however, is still controlled by someone else, so its behavior could change with an updated goal.

As one of the most powerful B.O.W.s encountered in the Resident Evil series, Nemesis possesses many powers and abilities:

Nemesis appears as a cameo in Hulk's ending. Hulk and Chris are in a mansion with numerous zombies trying to get to Wesker, and when Hulk asks what Nemesis is Chris tells him that it tried to kill his partner Jill, after this Hulk is shown attacking Nemesis.

Nemesis joins the Weapon X program. Ozwell E. Spencer lauds The Director on the upgrade, although The Director merely states that they're nothing more than "minor enhancements". Nemesis is then seen with adamantium claws on its hands. 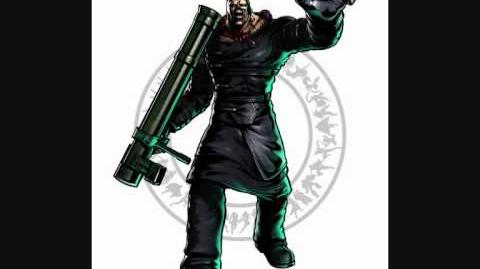 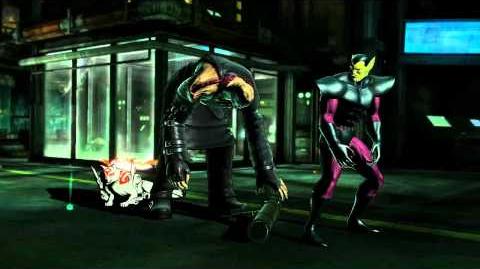 Retrieved from "https://marvelvscapcom.fandom.com/wiki/Nemesis?oldid=79014"
Community content is available under CC-BY-SA unless otherwise noted.