Gee... this looks so much harder in the comic book.

Norimaro is a playable character in Japanese version of Marvel Super Heroes vs. Street Fighter. He is an original guest character created by Capcom in cooperation with Japanese comedian Noritake Kinashi.

Norimaro was created from the very start by Noritake Kinashi, who doodled the character's design in one of the design computer at Capcom's offices. He's an awkward and ungainly-looking man based on the stereotypical Japanese nerd and wears a purple school uniform that has a name tag and big glasses. He's armed with a camera and a white satchel where he keeps common school items such as rulers and folders, mini-Gouki dolls, and plushies he uses as projectiles. He has a very noticeable mole on his nose.

Norimaro is a cowardly school boy armed with a camera who corresponds to the profile of "misfit"; he throws common school items such as rulers and folders, mini-Akuma dolls, and plushies as projectiles; and in his taunt animation attempts to ask for his opponent's autograph. During its creation, Kinashi described Norimaro as a 2nd-year high-school student with the face of an older man, with a spineless but proactive personality and a hobby for jumping fences.

As Norimaro was created as a simple joke character based on a real-life person, he has no known established official backstory. Based on his appearance and actions, Norimaro appears to be a Japanese student that has somehow entered the world of the game and takes this opportunity to tour around, taking pictures and asking for autographs while at it. His actions and lines indicate he's a big fan of Chun-Li and well-versed in Marvel characters, even knowing they are actually comic book characters.

In his ending, Norimaro went for world domination after his victory over Apocalypse and Cyber-Akuma, tyrannically ruling over Earth with an iron fist for many years, and upon his death, it is said he became a tedious subject in History books.

Norimaro has unique gameplay in the Marvel vs. Capcom series, he fights without (technically) fighting at all. He is an unable fighter, but he still has the potential to fight. He throws various everyday objects at the opponent and some ordinary actions, such as slipping on a banana peel (which acts as his launcher) are part of the attacks. Most of his moves are comical and aren't related to fighting, making Norimaro a joke character. But despite this comic relief facade, he is a pretty decent character to play with and has some of the most powerful moves in the game.

This non-fighting gameplay style was later inherited by Phoenix Wright in Ultimate Marvel vs. Capcom 3.

Norimaro was born out of a collaboration effort between Capcom and Noritake Kinashi. The new character was initially stated to make an appearance in the "most recent work related to the Street Fighter series"[1], later revealed to debut in Marvel Super Heroes vs. Street Fighter, which was at the time the latest game in the company's release schedule. Executive Producer Yoshiki Okamoto really disliked the character, thinking he was incredibly uncool, but artist Akiman really liked his clear and simple design and praised him[2]. Okamoto was also fearing he'd end up debuting in Street Fighter III, still in development at the time, and allegedly made sure it would not be the case[1]. Norimaro was balanced in consideration of new players coming to play from watching Noritake's show.[3]

The entire process from beginning to end was documented as part of the Tunnels' comedy TV show, とんねるずの生でダラダラいかせて!! (Tonneruzu no namade daradara ika sete!!?). The show went through all steps of Norimaro's creation, including initial design sketches, motion capture sessions, and recording sessions. Every step was provided by Kinashi himself on-camera, under the humorous identity of "artist Kentaro Kinashi". There were also snippets where Kinashi and staff visited Capcom's offices and design studios and talked with staff members, some of which provided commentary on the characters' development. During the TV show's display of a prototype cabinet playing with Norimaro, he's shown having a unique grab move called "Okancho Service" (おかんちょうサービス, Okanchō Sābisu?) based on the Japanese prank known as "Kanchō". This move was removed from all versions of the final game, often believed at Marvel's behest.

The character's name was decided in a contest with the show's audience, who were asked to send letters with possible names for the character. Kinashi picked up the winning letter from 13-years old Akiyuki Uratani, christening the character "Norimaro".

Removal from other versions[]

In the copyright notice in all versions of the game, Norimaro's rights are jointly owned by Capcom, Nippon TV, and Arrival. As such, any future use of the character would require the permission from all three companies. Norimaro was removed from all overseas versions of the game. According to former Capcom graphic artist Katsuya Akitomo, Marvel was violently opposed to Norimaro's inclusion, as the company didn't want an "unpowered gag character" going against their heroes. The Capcom staff pleaded with Marvel to use him and eventually reached a compromise where Norimaro would remain an exclusive of the Japanese version.[4]

Norimaro appears in all Japanese versions of the game, but in the Arcade original, he's disabled if the Arcade's fee is set to 2 or more coins to play. This was apparently done due to a common tendency at the time for game centers to suddenly increase Arcade fees.

Years later, it was discovered that most of the localization work for Norimaro was already done. Hacking into the game files revealed a mostly completed translation work on Norimaro, possibly indicating the instructions to remove him came late in development.

All of Norimaro's victory lines were translated, as well as his pre-battle exchange with Apocalypse. His text bubble for his taunt and large warning in his Ultra Variety Private Memories Hyper Combo were redrawn in order to translate the Japanese text into English lines. One of the graphics in the same Hyper Combo, showing Norimaro bathing in a pink tub, was removed. As a result of this, the Hyper Combo only registers 19 hits instead of 21. Norimaro's ending, on the other hand, was not properly finished, appearing correctly but displaying Dan's ending text with Captain America's nametag instead of his own.

Norimaro also has an unused hyper combo that appears to be an anti-air attack. A thought bubble displays various Capcom women in seductive poses. He smiles at the thought, but then suddenly suffers a massive nosebleed that sprays violently in the air in front of him. The characters that may appear in his thoughts include: 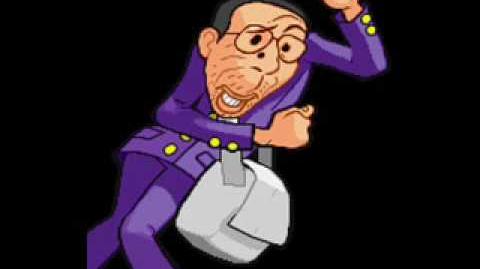