Edit
watch 03:19
'Marvel vs. Capcom: Infinite' – Nova Tutorial
Do you like this video?
Play Sound

Nova... the guy who put the "War" in New Warriors.

Nova, real name Richard "Richie" Rider is a superhero from the Nova series by Marvel. He is the host of the entire Nova Force, a vast energy source that he can access to grant himself a number of superhuman attributes. He is the current Nova Prime, the leader of the Nova Corps, and is mainly affiliated with the Guardians of the Galaxy, and secondarily affiliated with one of the Earth's super hero teams, such as New Warriors, Defenders and Heroic Age era Secret Avengers.

See also: Nova's alternate costumes in UMvC3, or in MvC:I

Richard's personality in Ultimate Marvel vs Capcom 3 is a combination of his brash, and cocky personality from his early appearances and his serious, determined attitude from post-Annihilation. Cocky, wisecracking, and self-absorbed, Rider is not unlike Hawkeye in terms of personality. He is also very lively and is a very competent fighter. Also like Hawkeye, he is serious mainly only when really needed, but at heart, he is a good person and a true hero who yearns to help the entire galaxy to the best of his power, and even beyond. He enjoys joking around with friends and potential enemies, one example being that his pre-match quote against Rocket Raccoon has him calling him an extra from Bambi.

Nova's ending features him reflecting and cherishing his time in the Nova Corps before he reveals his new team: the Mega Nova Corps. The team itself consists of the classic Mega Man, Proto Man, Roll, Beat and Zero all in Nova Centurion outfits.

Nova first appears with Gamora after getting information that Grandmaster Meio made an alliance with Ultron Sigma, in the same time upon being called that they have rescue & imprison Thanos to make sure he won't backstab the heroes to defeat Ultron Sigma, right after Thor Odinson became the first hero to fall victim to the Sigma virus, and the heroes lost him.

He later joins X's team to find the Power Stone and destroy the ultimate weapon Gravitron Core at Knowmoon. He and Captain Marvel fight Ultron Drone guards while Strider Hiryu and Gamora kill Meio, and X and Rocket Raccoon save Zero from the villains' brainwash. Though the heroes manage to get the Power Stone, they realize that Gravitron Core contains a Sigma virus, acting as a bomb to spread the virus gas across the Earth, and they are too late to stop it from falling to the Earth's atmosphere and was ordered by Captain America to retreat to Earth. Nova and Captain Marvel joins the other heroes on New Metro City street to held off Jedah Dohma's giant symbiote, but are ordered to retreat to the tower, as Thanos has other plan to stop the symbiote and the falling virus core.

Despite the heroes and Thanos manage to destroy the symbiote with the Infinity Stone they are currently holding, they failed to stop the virus gas spreading, leaving Doctor Thomas Light advices the heroes and Thanos to destroy Ultron Sigma once and for all with no option before the Sigma virus completely controlling their bodies permanently. Nova is amongst the heroes to raid Xgard earlier one last time with no coming back before Iron Man's team (sans Thanos) and Dante catches up with them in time. In the final battle against Ultron Omega (Ultron Sigma's unstable 2nd form as result from foolishly using Soul Stone while lacking of noble soul, tricked by Dante), Nova and the rest of the heroes (including a now cured Thor thanks to Soul Stone he caught onto him) helps X to power-up the Infinity Buster to finish Ultron Omega for good.

Despite Ultron and Sigma are finally being destroyed completely, the two universes remained in converged state when Mike Haggar, Nova and Frank West questioned about it, as the Reality Stone was cracked from previous battle between Thanos and Ultron Sigma, leaving it useless and requires some time to be repaired. This leads Thor to have some heroes keep 2 of 6 Infinity Stones on each 3 locations (Earth, Xgard, and Dark Kingdom).

Nova is a very straight forward rushdown character, and is unique among other characters with his ability to sacrifice red health to increase the damage of certain attacks. Nova has the fastest air dash in the whole game, this makes him good for air combos and mind games. 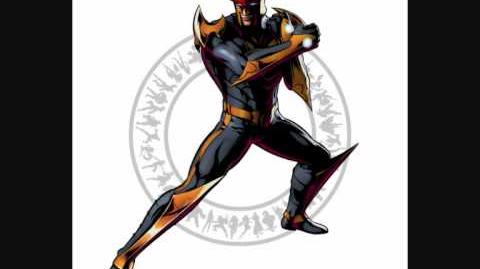