Better leave while I can still hold Dark Phoenix at bay.

Phoenix is a prominent character in the X-Men series by Marvel. As the host of the Phoenix Force, she is one of the most powerful mutants, and, as Dark Phoenix, has been stated to have cosmic-level powers.

See also: Phoenix's alternate costumes in MvC3, or in UMvC3

An Omega Level mutant, Jean Grey is one of the most powerful women alive. Her telepathy allows her read, influence, control, and communicate with the minds of others, project her mind into the astral plane, and generate telepathic force blasts that can stun or kill others. Jean is one of the few telepaths skilled enough to communicate with animals (animals with high intelligence, such as dolphins, dogs, and ravens). She can also telepathically take away or control people's natural bodily functions and senses, such as sight, hearing, smell, taste, or even mutant powers. Her telekinetic strength and skill are both of an extremely high level, capable of grasping objects in Earth orbit and manipulating hundreds of components in mid-air in complex patterns. She uses her telekinesis to often lift herself and others giving her the ability of levitation and flight. She also uses her telekinesis to create durable shields and energy blasts and also to excite heat molecules to generate heat, light and thermal blasts. She later manifests a "telekinetic sensitivity" (called "the Manifestation of the Phoenix") to objects in her immediate environment that let her feel the texture of objects, their molecular patterns, feel when other objects come into contact with them, and probe them at a molecular level.

When possessed by or bonded with the Phoenix Force, Jean's powers escalate to an incalculable level, allowing her to rearrange matter at a subatomic level, fly unaided through space, survive in any atmosphere, manipulate electromagnetic and cosmic energies for various effects and atmospheric disturbances. She also demonstrates this sub-molecular telekinetic power to change her Phoenix clothes into a set of street clothes. At this level, she is powerful enough to easily defeat a herald of Galactus. She can also create stargates that can transport her to anywhere in the universe instantaneously.

As the Phoenix, Jean can resurrect herself after death and is unaffected by the passage of time. Though initially perceived as "borrowing" the powers of the Phoenix Force, due to her original status as a host for the Force, they are entirely her own; Death itself has said that Jean is the rightful owner of those powers. Jean, while acting as a Phoenix Force avatar, can create 'cosmic' flames under any conditions even the impossible ones such as vacuum space or underwater. Not only do these flames not require oxygen to burn, but they also burn so intensely that matter is consumed without by-products such as ash. Jean has perfect control over these flames, and they only consume what she wills. Typically they manifest as a raptor or part of a raptor such as a claw or wings. It is unclear whether these flames are an extension of her powerful telekinesis or a more general property of the Phoenix Force, or it is possible that she can create her very powerful 'cosmic' flames by the combination of both her extended telekinesis power and Phoenix Force. It is certainly true that the cosmic flames are literal punctuation to the Phoenix's purpose to 'burn away what doesn't work.' She later becomes one with the Phoenix Force (as opposed to serving as its host) due to her status as an Omega-level mutant with unlimited potential, in which it was revealed that Jean holds the unique role of "White Phoenix of the Crown" among the many past, present, and future hosts of the Phoenix. As the White Phoenix, Jean can manipulate and control whole timelines, as seen when she brought the alternate future of Here Comes Tomorrow into the White-Hot Room. The Phoenix Force allows Jean to revive, absorb, rechannel, and preserve the life-force of any kind of life-form, meaning that she can take life energy from one person and give it to others, heal herself with the same life energy, or even resurrect the dead, since the Phoenix is the sum of all life and death.

X-Men: Children of the Atom Edit

Phoenix appears in Cyclops and Wolverine's endings as Jean Grey in a romantic scene with Cyclops.

The heroes congratulates Phoenix on defeating Galactus. However, Dark Phoenix has awakened during the struggle and prepares to fight the heroes.

Phoenix is the so-called "Glass Cannon" meaning that she can deal massive amounts of damage, but is dangerously vulnerable should the opponent's character ever retaliate and inflict any amount of damage in turn. Phoenix has the lowest health of any character in MvC3 and will likely meet a swift KO if the player is not careful. However, she has the unique feature of replenishing her Health Bar if her Hyper Bar is Maxed, allowing her to transform into Dark Phoenix, empowering her already powerful moves. Phoenix makes a lethal rushdown or zoning character, using her eight-way air dash & teleportation to quickly close the distance on an opponent and subject them to combos, and various projectiles and traps any effective keepaway game. When she transforms into Dark Phoenix, her melee, and ranged attacks are far, far more powerful. Use of her Healing Field should be part of her overall strategy, as well as building the Hyper Combo gauge to maximum. 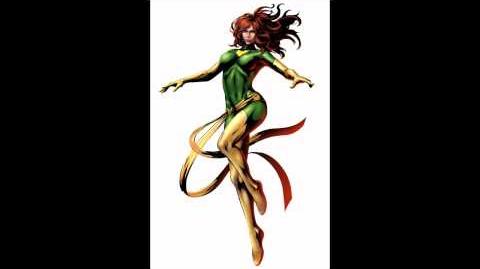 Marvel VS Capcom 3 - Phoenix's Theme
Marvel vs. Capcom 3: Fate of Two Worlds
Add a photo to this gallery

Phoenix's moves in Marvel vs. Capcom 3: Fate of Two Worlds

Retrieved from "https://marvelvscapcom.fandom.com/wiki/Phoenix?oldid=74486"
Community content is available under CC-BY-SA unless otherwise noted.