Edit
watch 03:14
'Marvel vs. Capcom: Infinite' – Rocket Raccoon Tutorial
Do you like this video?
Play Sound

|Guardians of the Galaxy

The Guardians of the Galaxy are nothing without me.

Since Rocket is a raccoon, he has sharpened senses and above average vision. Additionally, he shows great skills with all types of weaponry, though he prefers guns. He is also an very competent spaceship pilot. In order to fly, he is equipped with rocket skates. He is also quite a strategist, being capable of deal with different types of situations and enemies; accordingly to Starlord, "(he) got the best tactical mind I ever met".

Believing Raccoon City to be nice place of relaxation, Rocket already packed for vacation there. However, Rocket initially did not believe Chris's warning about the abandoned city he use to live is now a ground zero area filled with T-Virus zombies, until the former arrival there and discover that the BSAA agent was right all along, forcing him to fight off the hordes of zombies.

Rocket's gameplay is mainly focused on zoning. His traps can cause a lot of nuisance for his opponents as they must be careful where they tread. The Spitfire is a slow projectile which also acts like an obstacle, restricting the opponent's movement. Log Trap is also used as well as his c.H to keep his opponent at bay. Once the opponent makes a wrong move, Rocket Raccoon moves in quickly to punish his opponent. He excels against rushing characters and specially large characters (such as Hulk, Sentinel and Nemesis). His normal attacks are very fast, meaning he can hold off on his own in case said enemies get too close, but due to his low damage, however, Rocket is made not to kill but to annoy. 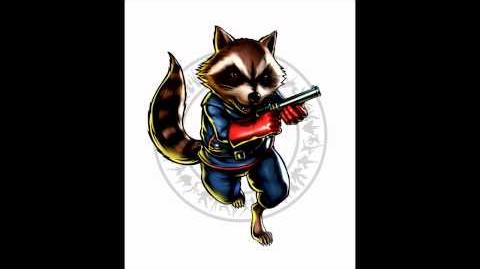