Rogue (Anne Marie) is a member of the X-Men. More than most mutants, Rogue considers her powers a curse. She involuntarily absorbs the memories, physical strength, and, in the case of super-powered persons, abilities of anyone she touches. This prevents her from making physical contact with others, including her longtime on-and-off again love interest Gambit. Hailing from the Caldecott County in Mississippi, she is the X-Men's self-described southern belle. A runaway, she was adopted by Mystique of the Brotherhood of Mutants but turned to the X-Men when the aftereffects of her repeated use of her mutant power - particularly the permanent absorption of Ms. Marvel's psyche and Kree powers - threatened her sanity.

Much later in Rogue's career, the X-Men divided into two teams to better make use of their large number of active members, Rogue was assigned to the Blue Team, under the leadership of Cyclops and alongside new X-Man Gambit. Rogue and Gambit were immediately attracted to each other, but the development of their relationship was slow and rocky, partly as a result of her inability to control her powers and partly as a result of long-term issues with secrecy, dishonesty, and fear of intimacy on both sides. Gambit and Rogue have one of the longest standing X-Men relationships, probably only second to Cyclops and Jean Grey. Following the supposed 'death' of Cyclops, the X-Men team underwent major changes, amongst them Rogue being made the team's new field commander. Her even temper and years of X-Men service made her an ideal leader and she continued to lead the team until Storm returned.

Rogue's mutant ability allows her to absorb the essence of anyone she touches through skin to skin contact. This includes their personality, memories, and often their physical characteristics. In the case of super-powered individuals, she also absorbs any extra abilities they might possess. This transfer is usually temporary, lasting for a period of time relative to how long contact is maintained; however if Rogue holds on to her victim for too long, the transfer may become permanent, leaving the victim dead. As a young woman Rogue permanently absorbed the many powers and psyche of Ms. Marvel (Carol Danvers): Superhuman strength, superhuman durability to most forms of physical harm, flight, precognitive seventh sense, and resistance to telepathy. She has also absorbed Sunfire's power of solar absorbtion seemingly permanently. Over the course of time and after various events, Rogue was left with only her original power, and recently with the aid of Professor Xavier, she has finally gained full control over it.

She, along with Cyclops' brother Havok, has recently joined the Uncanny Avengers, a team assembled by Captain America in the aftermath of the Avengers vs. X-Men conflict with the intent of assisting the mutant populace as well as the human one. Also, following the events of the 2015 Secret Wars storyline, Rogue has become the field leader of the Avengers Unity Squad, whose members include not just Cap, but also Spider-Man, Deadpool, Brother Voodoo, Synapse, Quicksilver and the Human Torch (Johnny Storm).

Rogue Vs. Pose in XMvSF

Rogue in the XMvSF Advertisement 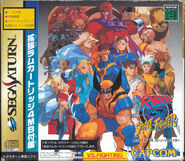 Rogue in the XMvSF Boardgame

Rogue as an assist character in Marvel vs. Capcom

Rogue's Vs. and Hyper Combo pose in MvC2

Ultimate Marvel vs. Capcom 3 - Rogue Card
Add a photo to this gallery

Rogue's moves in Marvel vs. Capcom 2: New Age of Heroes

Retrieved from "https://marvelvscapcom.fandom.com/wiki/Rogue?oldid=68378"
Community content is available under CC-BY-SA unless otherwise noted.