Street Fighter series
Sakura Kasugano is a character from the Street Fighter series by Capcom. She is a young Japanese girl who has an intense fascination with Ryu and started street fighting career in her high school day. She has managed to copy and learn some of Ryu's techniques, but really wants him to train her personally.

Sakura debuted in Marvel Super Heroes vs. Street Fighter and reappeared in Marvel vs. Capcom 2: New Age of Heroes.

Sakura typically fights in her school's uniform, a blue and white short-skirted sailor fuku (seifuku) with the collar popped and a yellow tie around the collar, held together by a blue and white striped band. She wears a red top under her uniform, sparring gloves, and a white headband. Her "Sunburned Sakura" variant changes the color of her sailor fuku and the band holding the tie around her collar to black and white and her skin and hair to a darker brown, but beside these changes, Sakura and her "Sunburned" variant are exactly the same. This appearance was prior to her graduation in Street Fighter V sub-series.

Sakura was not one of the initial Street Fighters pulled into the Marvel Universe, but she did arrive for the second event during Marvel Super Heroes vs. Street Fighter. Sakura, having not yet fully mastered her own style of fighting, felt the most disoriented as a result of being in a different universe, and found that her fighting abilities were slightly altered. She was unable to control the direction of her Hadoukens and found them launching up towards the sky. However, she was excited to find that she could throw them in mid-air down towards the ground. But that was not the end of the oddities that Sakura encountered.

Taking a break between matches, Sakura laid down in a field and fell asleep. When she awoke, she found herself unusually sunburned for the short duration that she had lain there. Though slightly in pain, she proceeded to compete in the effort to defeat Apocalypse. However, not only did she find that her original fighting style had returned, she was even more powerful than before, capable of performing attacks in a manner similar to Akuma, but feeling no murder intent thirst. Over the course of the events, her sunburned faded and her fighting abilities returned to the way they were when she first arrived. If you beat the game as Dark Sakura in the Japanese version, however, the game will show Dark Sakura teleporting towards Akuma, with both of them turning their backs towards the player while facing him/her, and then teleporting away. This ending has two variations: Kei will either follow Dark Sakura and Akuma after they teleport off-screen, or Kei will try to follow them, but will trip over something, fall on the ground, and sigh.

During the events of the first Marvel vs. Capcom: Clash of Super Heroes, after Apocalypse was defeated and Ryu was helping some of the Marvel heroes battle Onslaught, she accompanied a very distraught Zangief to see a man known as Doctor Strange. While Doctor Strange helped Zangief cope with the presence of his mechanical doppelganger, he also taught Sakura how to tap into the fighting energy that was produced as a result of her sunburn so that she could use it at will. It took a tremendous amount of energy and concentration, but when she returned to help the warriors fight Abyss in Marvel vs. Capcom 2: New Age of Heroes, she did indeed find that she had the ability to transform herself into her sunburned variant when she accumulated enough energy.

Sakura fights in an emulation of Ryu's fighting style. In the Marvel vs. Capcom series (under her "Hiyakeshita Sakura" version), the Street Fighter EX series and Rival Schools, she also gains the Shun Goku Satsu and in Marvel vs. Capcom, {C}Sakura is able to launch her Hadouken in the air, but it is bigger in appearance. Her Shinkuu Hadouken is similar to Ryu's when she is in her "Sunburned Sakura" variant. 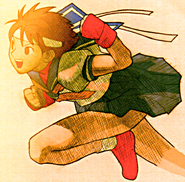 Marvel vs. Capcom 2: New Age of Heroes Hyper Combo and Versus Screen art

Sakura and Spider-Man in the ending of Marvel vs. Capcom 2: New Age of Heroes.

Sakura's moves in Marvel vs Capcom 2: New Age of Heroes