How many ladies made the cut for both the Avengers and the Fantastic Four? You're looking at her.

She-Hulk, real name Jennifer Susan "Jen" Walters, is a character from the Incredible Hulk series by Marvel. Due to the transfusion of Bruce Banner's gamma-irradiated blood, she mutated into a female version of the Hulk, possessing the same superhuman physiology and abilities.

See also: She-Hulk's alternate costumes in MvC3, or in UMvC3

She-Hulk possesses enormous superhuman strength, which even when calm makes her one of the strongest known women in the Marvel Universe.

As She-Hulk, Walters is exponentially stronger than she is in her Jennifer Walters form; therefore any extra strength gained as Jennifer Walters through intense physical training will be amplified, making her She-Hulk form even stronger. After being defeated by the Champion of the Universe, She-Hulk exercised for several months in her Jennifer Walters form, resulting in a significant gain in strength and muscular mass in her She-Hulk form and allowing her to soundly defeat the Champion in a rematch. At this time she was able to effortlessly sustain the Thing's maximum weight with a single arm, while her strength was greatly restrained by a "Jupiter suit," and she was shown as considerably stronger than Hercules. Her base strength level has since receded.

She-Hulk's body is superhumanly durable and nearly impervious to force, pain, and disease: her skin can withstand extremes of temperature, as well as tremendous stresses and impacts without puncture wounds or lacerations. Her enhanced physiology renders her immune to all terrestrial diseases. She-Hulk also possesses a healing factor, which enabled her to completely recover, within minutes.

She-Hulk's ending consists of her being the judge of her own court TV show called "Jen's Justice," with both Phoenix Wright and Miles Edgeworth as defense and prosecution respectively. Before she delivers her verdict, she accidentally smashes the judge's stand with a slight tap of the gavel, leaving both lawyers panicking and hugging each other out of fear with She-Hulk telling the Bailiff that she "did it again."

She-Hulk is a physical powerhouse who excels in close combat. She has the second highest stamina of all the female characters in the game and among the highest overall, surpassed only slightly by Thor, Hulk, Haggar, and Tron Bonne. Her moves not only exceed in damage, but also range and speed, making her one of the fastest heavy characters in the game. Her Chariot allows her to further rush against opponents, and many of her moves can hit OTG. Because of her mobility and throws, she is considered a Mix-Up Rushdown character, able to stay close to her foe at all times and use perform powerful extended combos, but she also fills the role of a Hard Hitter & Battery characters quite well because of her high health and ability to perform her combos with using her hyper combos. 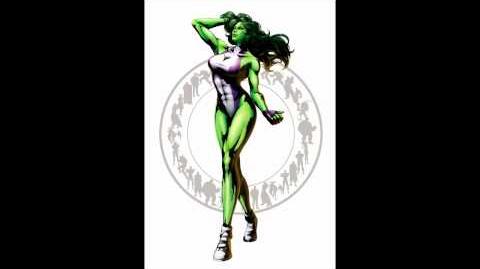 She-Hulk's moves in Marvel vs. Capcom 3: Fate of Two Worlds