Shuma-Gorath, when first in the line-up.

Shuma-Gorath is an creature from the Marvel Comics. He is one of the Great Old Ones, beings who walked the Earth and even the universe itself since its conception.

See also: Shuma-Gorath's alternate costumes in MvC3, or in UMvC3

Shuma-Gorath is a powerful and ancient demon of the highest order and possesses vast supernatural powers. He has superhuman strength and endurance which, being magical in nature, are incalculably high (the upper limits of his strength and endurance are unknown). Among his many (mostly-uncatalogued) mystical powers are the ability to communicate with and control others across dimensional barriers, to create and direct powerful blasts of mystical energy, and to affect transmutations on a planetary scale. He can also teleport and phase at will; he can also levitate. He can enter and leave different planes of existence and dimensions at will and has reality warping powers. He can also summon demons and other supernatural creatures to do his bidding. His intelligence is nearly immeasurable, approaching omniscience.

Because of his body's unique form, he has the ability to shapeshift and even liquefy himself. He also has the ability to generate several forms of energy attacks, mostly forming from his one eye. One attack not generated from his eye is when he forms a ball of pure energy that can shatter realities using all of his tentacles to generate the ball above himself.

His skin is rubbery and armored, making him difficult to damage except by the most powerful magics. Though he often appears as a scaley being with six to eight tentacles and a great, central eye, during the Hyborean Age he was also seen to have numerous pincers, claws, and insectoid limbs, in addition to a large, fanged maw. Similarly, he has been depicted as either greenish or purple in color. Presumably, he can alter his form at his leisure. His size seems to be related to his power, as he is truly gigantic in his home dimension.

In his native dimension, he is virtually omnipotent. Given his past reformations, it is unknown if he can ever truly be killed.

Shuma-Gorath uses the Infinity Gems to rule the universe. He grows larger and sees everything that he can control.

Shuma-Gorath is essentially a rushdown character. He possesses a lot of air mobility which can be further increased with the use of Air Mystic Smash. His throws are unique, as they can replenish Red Health, making him a very enduring character. Shuma-Gorath is most suited to using an obscure rushdown strategy with recommended air and overhead attacks, with his medium air attack having a particularly long reach with a fast startup time and reasonable damage; it should be the staple of Shuma-Gorath's attacks while in the air.

In addition, his air "special" attack allows him to surprise any unwary grounded opponents, petrifying Shuma-Gorath and allowing him to quickly slam opponents with a ground-pound attack while in his stone form. While Shuma-Gorath has an air-dash, his Mystic Smash attack and any of its variants allow him to quickly close distance quickly on an opponent while simultaneously inflicting damage.

Furthermore, if Shuma has managed to corner an opponent, his quick-deploying Devitalization command grab and his Leech Life throw can be put to good use, allowing Shuma to both assault an enemy with constant and instant command grabs, and exploit an opportunity to recover any lost red health in the process. 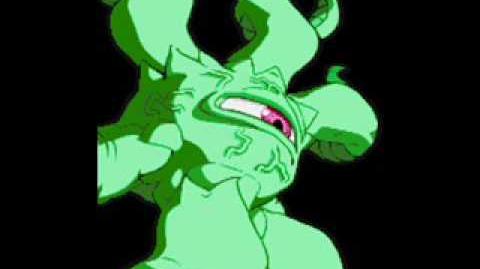