Spider-Man is a very mobile character. His low battle stance allows him to dodge attacks easily, with his crouching stance taking it up a notch. His combo potential is very high, allowing him to chain many moves to extend his attacks. His combos are fast, but generally require high execution, though the allocations in MVC2 somewhat mitigate this. Spider-Man can also triangle jump, as well as cling to the wall before leaping off. He can even air dash, though it only goes one direction.

However, his standing HK (now his standing H in MVC3) has some odd properties in that it only launches on a midair foe, though he can still super jump from it if it hits. His crouching MK (now his crouching M in MVC3) is meant to kick up foes for his st.HK to properly launch, though in MVC3 this is no longer the case as both attacks no longer launch. Spider Man's combos are also confusing in terms of proper chaining in past games, as his standing MP was a launcher like some characters', which caused some magic-series confusion. However, Spidey also packs some great range on several of his normals such as his old crouching HP which makes him lean in rather far, giving great forms of poking and close-combat spacing. His Web Throw is also great for some ranged attacking prowess, though his Web Ball is a generally unneeded move.

In MVC3, his combo potential has been retweaked thanks to the new control setups, and with his Web Glide attack, he can now zone the opponent more so than ever and can even use it to set up combos by pulling himself towards the foes, and at proper angles can even mixup and/or crossup foes at times. This, combined with his Web Swing, air dash and triangle jump can give him extreme match control ability. His Maxium Spider has also changed radically from a simple wall-to-wall attack to an initial blow attack that leads into a cinematic autocombo, improving its usage.

In UMVC3, Spidey's been buffed even more. For one, his Web Glide is faster, can be cancelled into from some of his specials and can hit OTG in midair. His Web Swing can now combo two times into itself (ground version to midair version), and his Ultimate Web Throw's hitbox has be readjusted (as well as being able to rotate the joystick to increase damage). However, in a negative light, his Crawler Assault no longer is as active in its frames (though it does a hard knockdown along with being button mashable), his Web Throw is also now subjective to damage scaling. 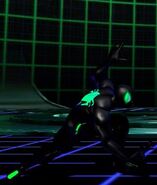 Victory Pose
Add a photo to this gallery
Retrieved from "https://marvelvscapcom.fandom.com/wiki/Spider-Man/UMvC3?oldid=67843"
Community content is available under CC-BY-SA unless otherwise noted.