Marvel vs. Capcom Wiki
Register
Don't have an account?
Sign In
Advertisement
in: Storm, Marvel Characters, Characters in X-Men: Children of the Atom,
and 5 more
English

You now face Storm of the X-Men.

Storm, real name Ororo Munroe, is a character from the X-Men series by Marvel. She is a mutant with the ability to control and manipulate all forms of weather patterns and other natural phenomenon.

See also: Storm's alternate costumes in MvC3, or in UMvC3

Storm is a mutant who possesses the ability to psionically control weather over limited distances (sometimes referred to as atmokinesis). She can create any form of weather - precipitation, winds, lightning, ocean currents. She has also demonstrated the ability to control natural forces that include cosmic storms, solar wind, ocean currents, and the electromagnetic field. Storm is widely regarded to be one of the most powerful mutants on Earth.

Storm still has to obey Mother Earth, however; she is unable to create climate conditions that do not exist naturally. For instance, she cannot raise or lower the temperature on Earth.

Storm also has several abilities outside of her powers. She has shown an affinity for magic, is a seasoned martial artist, and is a skilled markswoman with handguns. She is also extremely adept at picking locks and pockets, and always carries lock picks with her (secretly), and her ancestral ruby, which allows inter-dimensional transportation with the help of her lightning.

Storm converses with Magneto after his defeat. She tells him that she would rather follow her dreams than his obsessions. She leaves with the other X-Men as Avalon collapses. Later, as Storm roams the skies, she is alerted by Cyclops of a Sentinel nearby. She easily defeats the robot. Storm is then joined by Forge and they leave to defeat the other Sentinels.

While Storm is rescuing the heroes, she notices Forge. They rekindle their friendship until Shuma-Gorath interrupts the scene.

Storm is quite possibly the most versatile of all the Marvel characters in the game. She can be played both aggressively and defensively, possessing a variety of ways to close in on opponents. Her combo attacks: both ground and air are potent and inflict solid damage, especially when chained into her Ice Storm Hyper Combo as well as possessing decent priority. Storm can easily keep opponents at bay with her Whirlwind and Typhoon attacks and her ability to fly helps to keep her out of harm's way.

Storm's Hyper Combos are some of the most powerful in the game, particularly Ice Storm, which has been vastly improved over its previous incarnations in MVC3. It does tremendous damage on its own, but is even more dangerous when placed at the end of a combo attack and does considerable chip damage when blocked. Lightning Storm has a smaller radius of effect than before, but does more concentrated damage in an Air Combo when cancelled during Lightning Attack. Her third Hyper Combo, Elemental Rage can also be worked easily into a ground combo.

A general weakness of hers is that some of her attacks are sometimes a bit slow, so she mustn't abuse them as such. Another thing is that next to some of the other powerful characters in the game, she also has a high-learning curve since most of her combos are some of the most complex in the game, though at the same time very rewarding. Storm is also rather bland without any meter, since her Hyper Combos by far are the meat of most of her combos. Her flight and floating tricks are also gimmicks that require high-execution, as well as some attacks that can be spammed to build meter quickly in conjunction with such tricks, though some attacks have been nerfed in their meter gain as of MVC3. 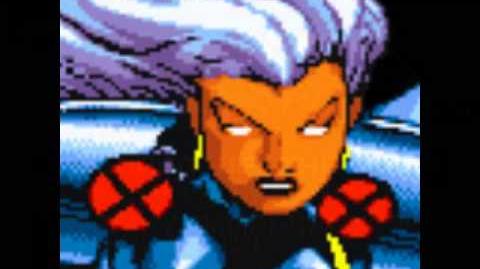 X-Men COTA OST On The Blackbird (Theme of Storm)
X-Men: Children of the Atom 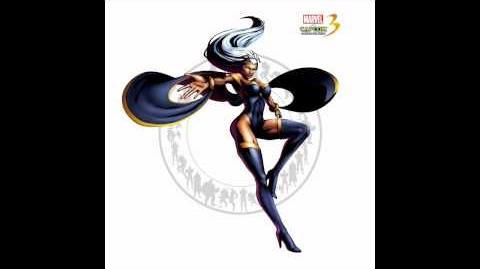