There's far too much trash in the universe.

See also: Super-Skrull's alternate costumes in MvC3, or in UMvC3

Super-Skrull, while not using any of his Fantastic four powers, has the appearance of an average Skrull. He has green skin, red eyes, pointy ears, and a rough, bumpy chin. He wears the uniform of any Skrull soldier, a purple body suit with the color black covering most of the upper body that extends to shoulder pads and what resembles underwear on the outside of his suit. It also involves a strange, hood-like attachment on the top of his head. He also wears black boots and gloves.

As a Skrull, he can alter his appearance at will, so his appearance is not constant. While using his Fantastic Four powers, it changes him as well. Mister Fantastic's power causes his appendages to stretch, extending his body. While accessing the powers of The Thing, any part of his body takes on an orange, rocky exterior. The Human Torch's powers simply light him ablaze without causing direct harm, while the Invisible Woman's powers can be used to render him invisible or project a force field.

Super-Skrull is extremely loyal to the crown of the Skrull Empire. He sees himself as a hero of his world, as do many Skrull citizens. Despite his faith for the crown, he has a sense of honor which sometimes leads him to side with the heroes of Earth, even against his own brethren. An example of this is when he solved a conflict between the Skrull and their enemies the Kree, who were fighting over possession of the half-Skrull, half-Kree Young Avenger Hulking. He shape-shifted into Hulking and said he will spend a year with each group and then make a decision, thus deceiving his own Empire. He also showed his more heroic side during the second Kree-Skrull War when he came to the defense of Zenn-La, homeworld of the Silver Surfer when it came under siege by the Kree.

Super-Skrull is making a speech in front of his fellow Skrulls about him having avenged his homeworld. He then calls to all other species to join the Skrull Empire to guarantee the safety of the universe.

Super-Skrull is a very powerful rushdown character who can easily punish other rushdown characters. Possessing a wide range in most attacks and specials, he can easily poke characters to keep them off balance. His moves are very versatile and have follow-ups, allowing him to inflict more damage. He, however, lacks projectiles, which makes him somewhat hard to use against defensive characters like Dr. Doom and Storm who can outzone him. However, moves like his Elastic Slam can be amazing for a considerate amount of resets, making him rather hard to stop once Skrull finds a way into his foe's defense. Coupled with this and his amazing OTG assets, Skrull can also combo off of any of his throws to extend his combos to great lengths. 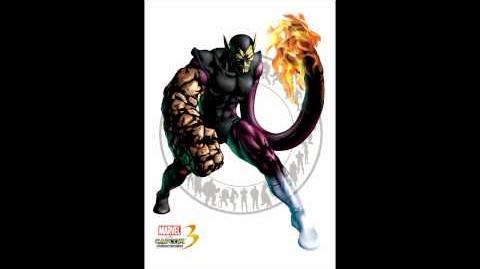 Marvel VS Capcom 3 - Super Skrull Theme
Marvel vs. Capcom 3: Fate of Two Worlds
Add a photo to this gallery

Retrieved from "https://marvelvscapcom.fandom.com/wiki/Super-Skrull?oldid=74112"
Community content is available under CC-BY-SA unless otherwise noted.