Thanks for the moves. Now get out of my face!

Taskmaster, real name Tony Masters, is a character from the Avengers series by Marvel. He is a mercenary born with the ability to duplicate and memorize motor skills at the cost of his true memory.

See also: Taskmaster's alternate costumes in MvC3, or in UMvC3

The Taskmaster's only superhuman abilities were that of his photographic reflexes. He was able to duplicate almost any physical act he sees after seeing it done by someone else only once. Due to these reflexes, he can do things which border on superpowers. For instance, Taskmaster has discovered that after watching martial arts movies on fast-forward he is able to briefly duplicate the moves at a greatly increased velocity, effectively giving him a limited form of super-speed. However, as he does not have any sort of enhanced endurance, this puts a great strain on his body and he is only able to fight in this manner for short periods of time or risk injuring himself.

He can also copy the subtle muscle movements of others so precisely that he can at times do things such as copying another person's voice so precisely as to fool voice recognition software. He can also do things such as figuring out the sleight of hand techniques of a master poker cheater simply by watching them. He can even duplicate the nearly superhuman abilities with thrown projectiles which Bullseye exhibits, or approximate the agility of someone like Spider-Man, at least up to a point that doesn't require superhuman effort. He is also capable of using this ability to master complex gymnastics routines and play difficult pieces of music. However, he typically prefers to use this ability to copy the combat skills, both armed and unarmed, of costumed crime-fighters and expert martial artists from around the world, typically seen through watching videos of them in combat situations. He has often shown the ability to actually predict an opponent's next move before they make it if he has studied their fighting style enough. Opponents who are skilled at improvisational fighting styles, or who have a more random unpredictable style are less likely to have their moves predicted by Taskmaster (such as Deadpool). The Taskmaster is a master strategist and tactician (seen particularly in surprisingly successful combat against both Iron Man and two Captain Americas simultaneously during the Siege of Asgard).

The Taskmaster is an Olympic-level athlete and is possibly among the most formidable armed and unarmed combatants in the Marvel universe. Besides his photographic reflexes, he possessed photographic muscle memory that allows him to instinctively, instantly, and completely learn and acquire new skill and abilities. While not having any superhuman physical, mental, or energy manipulative abilities, the Taskmaster was able to routinely battle super-human powered foes with an impressive degree of success.

However, the Taskmaster was not capable of duplicating a physical feat if the effort to do so requires superhuman effort. For instance, while he could view an opponent lifting a car, he could not do so because his body can't duplicate the superhuman strength required to do so. Although he has already proven to be able to manipulate chi to watch a martial artist showing him how to stop the opponent's heart accumulating chi wrist.

Taskmaster has at times been known to use a wrist device stolen from S.H.I.E.L.D. which created weapons out of pure energy, usually to mimic the powers or equipment of others such as Captain America's shield or Spider-Man's webbing. These weapons apparently had substance even after he let go of them, at least for a short time.

The serum wasn't without side-effects, however, although it allowed Taskmaster to copy the fighting styles of others, it had an adverse effect on his personal memory (e.g. he couldn't remember his past).

Taskmaster had an assortment of female fighters from the game promote his line of products (Trish, She-Hulk, Chun-Li, Crimson Viper, Phoenix, and Felicia). In Ultimate, the artwork was changed to other male mercenaries from the Marvel Universe: the Trapster (a.k.a. Paste-Pot Pete), Orka (a C-list rogue of Namor), Stilt-Man (only seen in the picture by his long mechanical legs), the Porcupine, and Batroc the Leaper.

Taskmaster is a very versatile character, able to play rushdown, zoning, and defensive. His Guard Master allows him to punish many rushdown characters, and his Aim Master is very fast, complementing his zoning. Both his Spidey's Swing and Shield Skills can be chained/canceled in normal attacks, as they're not essentially special attacks, making his combo's very versatile. Taskmaster is a defensive-minded all-around-character most suited to keep-away strategies and counterattacks, punishing any careless opponents who would rush in too quickly. In particular, his Guard Master attacks and Aegis Counter are useful counters to brutal rushdown characters like Wolverine or Zero, allowing Taskmaster to counter brash overhead or low-aimed attacks. 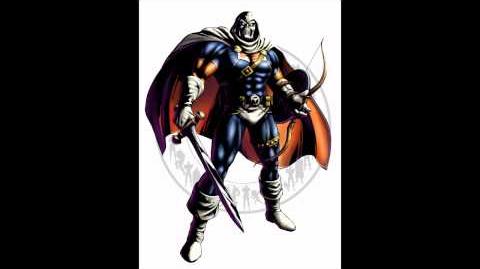 Marvel VS Capcom 3 - Taskmaster's Theme
Marvel vs. Capcom 3: Fate of Two Worlds
Add a photo to this gallery

Retrieved from "https://marvelvscapcom.fandom.com/wiki/Taskmaster?oldid=76703"
Community content is available under CC-BY-SA unless otherwise noted.