Edit
watch 03:14
'Marvel vs. Capcom: Infinite' – Thanos Tutorial
Do you like this video?
Play Sound

You are no god! You are a fool. You wield the greatest power in all creation, yet you wear them like trinkets, and use them like a child?

Thanos, born Dione, is a supervillain from the Marvel Comics. He is a powerful Eternal and has clashed with many superheroes in the universe such as the X-Men, the Avengers, the Fantastic Four, and the Guardians of the Galaxy.

In Marvel vs. Capcom: Infinite, Thanos' armor is less flashy and has a more metallic look. The armor also has some lights emanating from it. His rock like-skin color is blue, as opposed to purple in MvC2. His helmet's horns are shorter.

Thanos is an extremely powerful individual and rock demonic alien warlord. Being an Eternal, Thanos possesses super-human strength, endurance, reflexes, and agility. His skin is highly resistant to heat, cold, radiation, electricity, aging, toxins, etc. He is able to survive indefinitely without food or water. He has been "cursed" by Death with immortality. Also, his mind is resistant to most psychic attacks, and is capable of projecting blasts of cosmic energy from his eyes and hands.

He came to acquire the Cosmic Cube, which allowed complete manipulation of reality and the elements.

However, this was nothing compared to the power that Thanos received when he obtained the Infinity Gauntlet. He possessed unlimited control over the universe; more specifically: Time, Space, Power, Mind, Reality, and Soul.

After defeating all challengers to his rule, Thanos makes a decision on what to do with the Infinity Gems.

If he gains more power, he will continue to shape the universe to his liking.

If he renounces the power, Thanos will settle down to become a farmer on Titan and warns any to try and take the gems.

Thanos and Ultron visits Death's realm to discuss their plan on conquering two universes with another suitable villains from Capcom universe together via Infinity Stones they gathered, but Ultron has his own plan on using the Stones as Thanos replies him being foolish enough to understand a further information about the Stone's true potentials due to Ultron is made of mechanics with no souls such as nobility, referring if Ultron uses Soul Stone later. Once Ultron forge an alliance with Sigma and merge into Ultron Sigma, Thanos expects the robots will betray him sooner, which became true. However, Thanos is defeated and is forced to watch Ultron Sigma merges both Capcom and Marvel Universes into one with Reality and Space Stones in "their" hand. Once Ultron Sigma has taken over Xgard, Thanos is imprisoned in a cell, completely bonded. 88 days after the convergence, he was released from his cell, but not his bonds, by the heroes who were rebelling against Ultron Sigma. He was transferred to the Avengers Tower, where he was released of his bonds and put in a different cell. Thanos tempts the heroes into releasing him, but while Captain America thinks their out of options, Iron Man refuses Thanos' help, ending in a conflict between the heroes. They at some point agree to release him in exchange for the stones and Thanos tells them the locations of the other four Infinity Stones. As Doctor Strange releases the containment from Thanos, Thanos warned the heroes that Ultron Sigma has infected Thor with an in-progress Sigma virus he infected early, and the heroes are too late to notice, losing their ally Thor.

The Avengers Tower is attacked by Ultron Sigma's forces. He potentially is able to break out of his cell and attacks Ultron Sigma, manage to defeat "them" at cost of the Reality Stone being cracked by Thanos' powerful punches. He later watches Ryu succumbed to Satsui no Hadou, and impress of its dark immortal killer ki. As Jedah about to weaken Ryu's soul to cause the dark Hadou completely controlling his mind and wrecks everything around, Thanos interferes and defeats Jedah. Jedah retreats, leaving the Symbiote under behind, and then after it's destruction, the whole world gets infected with the Sigma Virus.

Thanos agrees to power up the device that Iron Man created for X to destroy Ultron Sigma. However, Iron Man admits that the Time Stone, while unleashing the beam that destroyed the Symbiote parasite with the help of Thanos, revealed to him a flashback showcasing that the plan that Thanos and Death made was a set-up for the plan between Death and Jedah and that he was unintentionally the one responsible for the creation of Ultron Sigma due to Thanos' foolishness for having Ultron to accompanied him in a first place. This utterly angers Thanos, even more so when he sees for himself that Iron Man was telling the truth and takes on the entire group and defeats them single-handedly by himself while stealing the Satsui no Hado from Ryu to use it for his revenge against Jedah and Death, freeing Ryu completely. However, Thanos kept his end of the bargain and finished powering up the device and even gave the Time Stone to Gamora. Thanos then teleports away for his revenge.

In an after credits scene, it's shown that Thanos teleported to Death's location. Angered at Death for her betrayal, Thanos vows to destroy her and Jedah with the power of the Satsui no Hadou, which Thanos claims that it's full capacity has the potential to kill gods, demons and deaths. The outcome remained unknown.

Thanos was the final boss of Marvel Super Heroes, and was the most powerful character in that game. He was toned down in Marvel vs. Capcom 2: New Age of Heroes, having a large amount of his attacks taken out or nerfed. Thanos is fairly low tier in Marvel vs. Capcom 2. He doesn't have any dominating gimmicks, tricks or moves to exploit. Additionally, he cannot perform throws in the air. Thanos does have some upsides, however. His combo magic series is for all six hits on the ground, while jumping and super jumping. He has three different launchers, along with a 'mini-launcher' in his crouching medium punch

In Marvel vs. Capcom: Infinite, Thanos significantly changed his moveset, as he doesn't have his Infinite Gems anymore. Though most of his basic moves, as well as his only special move Titan Crush/Titan Charge maintained, and he gained some new specials and hyper combos, as well as some brand new unique moves. 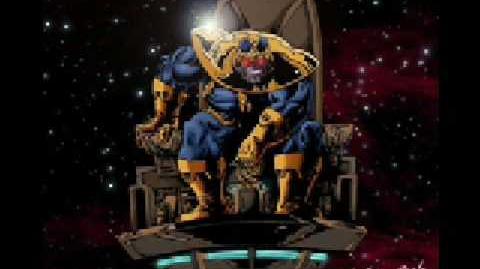