Start a Wiki
watch 03:23
'Marvel vs. Capcom: Infinite' - Thor Tutorial
Do you like this video?

I fight on behalf of all of Asgard!

Thor Odinson is a character from the Marvel Comics. He is an Asgardian, the son of Odin, and the Norse God of Thunder.

See also: Thor's alternate costumes in MvC3, or in UMvC3

Thor wears his costume after being reborn. He sports a helmet with large wings on the side and long, blond hair underneath. There are four metal plates on his tunic. Two that hold his red cape to him, and two that rest on his stomach. They are connected by yellow lines. His black tunic continues underneath his belt with an Asgardian symbol on it and a loop for his hammer, except the metal plates are replaced by two silver colored circles that are not metal. Underneath his tunic is a suit of chain mail, which is visible on his arms and legs. He wears black wristbands. On his feet are large boots that reach up to his knees with brown straps near the top and around the ankles. Underneath the brown straps in the ankles are two metal plates per foot on both sides.

Thor is a noble and brave hero. He has a great love for both Asgard and Earth, and sees both as his homes. Many other gods and Asgardians don't understand why Thor is so protective of Earth as he is the child of the benevolent Elder Goddess Gaea , but that doesn't stop him for embracing the people of Midgard (what Asgardians call Earth) as his friends. In his younger years, Thor was more brash and didn't think things through. After Odin sent him to Earth, Thor learned the better qualities his father wished to teach him. He also seems to forgive people quickly and honor family bonds, choosing to treat Loki like a brother until his next scheme comes to fruition. When Loki died during Norman Osborn's Siege on Asgard, Thor flew into a rage, despite all the trouble that his adopted brother had caused him over the years; he also managed to find Loki's spirit, incarnated as a French trickster boy, and bring him back to Asgard. Thor has chosen to always protect those he considers friends and family.

Like all Asgardians, Thor is incredibly long-lived and relies upon periodic consumption of the Golden Apples of Idunn to sustain his extended lifespan, which to date has lasted many millennia. Being the son of Odin and the elder goddess Gaea, Thor is physically the strongest of the Asgardians. Thor is capable of incredible feats of strength, such as pushing over the Leaning Tower of Pisa with his little finger, and ripping apart the Golden Gate Bridge. If pressed in battle, Thor is capable of entering into a state known as the "Warrior's Madness" ("berserkergang" in Norwegian and Danish alike), which will temporarily increase his strength and stamina tenfold, although in this state he attacks friend and foe alike. Thor possesses a very high resistance to physical injury that approaches invulnerability. Thor possesses keen senses that allow him to track objects traveling faster than light and hear cries from the other side of the planet. Thor has the ability to travel through time. His stamina allowed him to battle the entire Frost Giant army for nine months without any sustenance or rest; Thor has shown the ability to regenerate wounded portions of his body, including entire limbs or organs, with the aid of magical forces such as Mjolnir. Thor has superhuman speed, agility, and reflexes, enabling him to deflect bullets with his hammer. In early stories, Thor has shown to be capable of vortex breath, which produces powerful winds. Like all Asgardians, he has immunity to all Earthly diseases and some resistance to magic. Exceptionally powerful magic can overwhelm Odin's enchantment that transforms him between Asgardian and mortal forms. As the Norse god of thunder, Thor can summon the elements of the storm (lightning; rain; wind; snow) and uses Mjolnir as a tool to focus this ability, although the hammer cannot command artificial weather, only natural. He can cause these weather effects over the world and destroy entire buildings; by whirling his hammer he can lift entire buildings with the wind. Thor can also create small tornadoes by quickly whipping his cape in circles. As the son of the Earth goddess Gaea, Thor has shown some control over the Earth. Thor is a superb hand-to-hand combatant, and is skilled in armed combat, excelling in the use of the war hammer, sword, axe and mace. Thor possesses two items which assist him in combat: the enchanted Belt of Strength, and his signature weapon, the mystical hammer Mjolnir. The first item doubles Thor's strength and endurance while the second is used to control his weather abilities; flight; energy projection and absorption; dimensional travel; matter manipulation and the most powerful of his offensives, the God Blast (which taps into Thor's life force), the Thermo-blast, and the Anti-Force (which counteracts another force). Using Mjolnir by throwing in the desired direction and then holding on to the handle's leather loop, Thor can fly at supersonic speeds in Earth's atmosphere and travel faster than light in space. When Thor has to transport companions and/or objects to a destination by himself, he has a chariot drawn by two huge mystical goats called Toothgnasher and Toothgrinder that can fly nearly anywhere he desires almost as easily as with Mjolnir. He can throw an object out of Earth's atmosphere using his strength, and throw his hammer to Asgard from which it will return. When Mjolnir was damaged, Doctor Strange bound Thor's soul into Mjolnir, meaning that if the hammer were to be broken again, Thor may die.

In the story mode, Thor is amongst the heroes who raids a compromised Xgard (a merger between Marvel version of Asgard and Abel City from Mega Man X) to restore the throne from Ultron Sigma, as Doctor Strange found a prisoner who is very important and knows how to defeat Ultron Sigma, revealed to be Thanos and realize that he and his fellow heroes cannot defeat Ultron Sigma without Thanos' aid first, Thor and the other heroes distracts Ultron Sigma to come after them and buy their times for Chris and Doctor Strange's team (consisting Chun-Li, Rocket Raccoon and Strider Hiryu) to rescue Thanos, no matter what efforts. Thought Chris' team manage to rescue Thanos as the heroes retreat, Thor was planned by Ultron Sigma the in-progressed Sigma virus into the Thunder God's body.

Back in Avengers Tower (located in a merged version of Marvel version of New York City and Metro City from Street Fighter/Final Fight known as New Metro City) where the heroes were arguing each other about releasing Thanos from the lock used to silent him by Ultron Sigma), Thor began to feel ill as the Sigma virus is progressively infects him. He stops the heroes from fighting each other and tells them to task an important matters such as releasing Thanos from the lock by Doctor Strange while keeping him inside the barrier prison to ensure he'll never betray the heroes. However, just as Thanos alerts the heroes about Thor's current infected condition, they are too late to save Thor from the Sigma virus' quick infection progress, leaving Thor unavailable for the rest of the chapters until the final chapter.

During the heroes' last raid on Xgard after they failed to stop the Gravitron Core spreading the Sigma virus across the globe, infecting them, the infected Thor is later seen again, fighting Spider-Man and Morrigan, but was defeated by them as Spider-Man apologizes the Thunder God and tells him once he regained his remaining consciousness left, the heroes needs "another Iron Man" like Thor himself. As Dante tricks Ultron Sigma into foolishly using Soul Stone for lacking of noble souls and cause the tyrannical robot's transformation into a yet bizarre and insane second form Ultron Omega, in exchange to give Dante a permanent death by draining his life, Captain Marvel alerts Spider-Man to get the Soul Stone from Ultron Omega, but Ultron Omega shots Spider-Man's web, yet Thor caught the Soul Stone and finally being cured to his original-self. Thor and X manage to save Dante from Ultron Omega, just as Iron Man's group arrived with Doctor Strange, but without Thanos.

After the heroes aids X to destroy the Ultron Omega for good via Infinity Buster (powered by Time, Mind, Power and Soul Stones), the Reality Stone is still cracked due to a result from Thanos and Ultron Sigma's previous battle at Avengers Tower, rendering the stone useless to restore the realities into separate states. This leds Thor have an idea to placed 6 of 2 stones in 3 different safer locations, such as Xgard, Dark Kingdom, and Earth, with heroes starts to rebuild the converged universe as their own home while waiting for the Reality Stone to be repaired soon enough. He also remind Spider-Man to never call him "Iron Man" again, as it is not funny to him and don't want to compare himself with Iron Man, even when he was in infected status.

Thor is a powerhouse. While he lacks mobility on the ground, he can easily overpower enemies with his powerful air combos and good air mobility (most of his moves cause wall bounce or hit OTG). He is a very powerful, aerial based character, and has the highest Vitality in the game next to Nemesis as well as extraordinarily high power close to that of the Hulk. He's infamous for his Mighty Speech and his very long taunt which some players perform at the end of a match to provoke their opponents and prolong their humiliation. 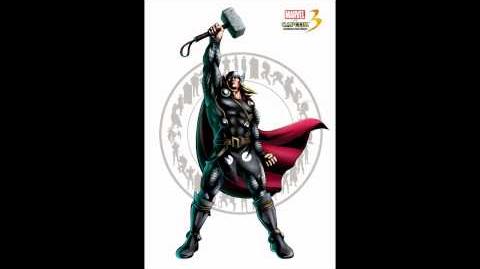 Retrieved from "https://marvelvscapcom.fandom.com/wiki/Thor?oldid=74114"
Community content is available under CC-BY-SA unless otherwise noted.