Be a lamb, go gentle on me.

Trish is a character from the Devil May Cry series by Capcom. She is a demon created to resemble Dante's mother Eva, and eventually joined Dante's group as a Devil Hunter.

See also: Trish's alternate costumes in MvC3, or in UMvC3

Being a demon created to trick Dante, Trish was created to look just like his mother, Eva, having the same blonde haircut. While also carrying around The Sparda, Trish wears a leather top with a thunderbolt shaped crack between her breasts, as well as black pants and boots.

Trish fights using The Sparda, as she did in the first two installments of DMC. She has access to Round Trip as a projectile, and Super Move. She can perform her lightning abilities from the original Devil May Cry, as well as Luce & Ombra, guns she had in Devil May Cry 2. 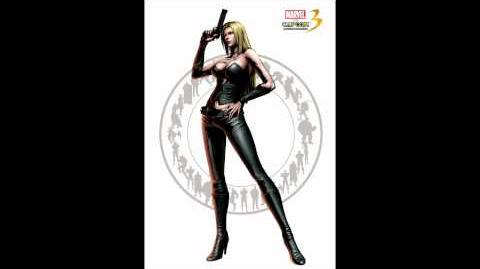