Tron Bonne, Queen of the Servbots, at your service!

Tron Bonne is a character from the Mega Man Legends series by Capcom. She is a genius architect from the Bonne family of air pilots. She controls the Gustaff and is assisted by the Servbots she created.

Though she is a pirate and has been shown to be rather greedy and egotistical, she has also shown a noble morality throughout the series, performing altruistic deeds like aiding her archenemy Mega Man in the Mega Man Legends series; or chastising, defeating, and turning in a crime boss to the police for his barbarity of attempting to utilise an ancient robot vehicle to devastate and conquer the world in the spin-off game The Misadventures of Tron Bonne. Thus, Tron knows when to "draw the line" when performing acts of piracy, or when any scheme becomes too morally questionable for her liking.

Temperamental and prideful when in the presence of others, Tron's personality towards her forty-one Servbots is more reminiscent of a disciplinarian mother towards her children. She is very harsh and demanding towards her Servbots, but is quick to praise and reward them for good performance, being very caring and compassionate towards them when they're not performing any number of tasks.

Tron and her Servbots return home to ask Mega Man Volnutt to go out with him and threatens him with a reprogrammed Sentinel.

Tron Bonne is an unorthodox character, using her Bonne Strike and long ranged, damaging normal attacks to keep the opponent pinned, leaving them vulnerable to her unblockable command grab. Tron also possesses a large amount of health, on par with the Hulk.

If an opponent is hit by the Bonne Strike, Tron can easily transition that attack into her Servbot Takeout Hyper Combo. If it is blocked however, the opponent has to watch out for her command grab. All her normal attacks are very damaging, and her Air Rake can make opponents bounce if hit on the ground.

Tron Bonne is also very effective as an assist character, with three assists that are effective if used correctly. Her Gustaff Fire assist, in particular, is very difficult to punish and causes a freefall state if it hits an airborne opponent. 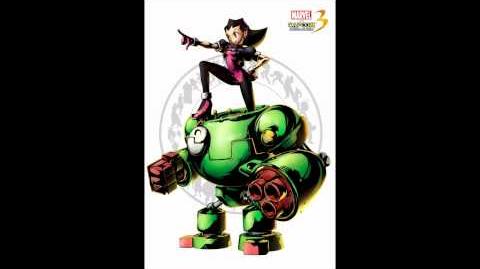 Marvel VS Capcom 3 - Tron Bonne Theme
Marvel vs. Capcom 3: Fate of Two Worlds
Add a photo to this gallery

Retrieved from "https://marvelvscapcom.fandom.com/wiki/Tron_Bonne?oldid=74116"
Community content is available under CC-BY-SA unless otherwise noted.