We are born of two universes. Each of them imperfect, each of them afflicted with the cancer of organic life. From their ruins, a new universe shall be forged, in the fire of the stones of reality, and space. All life remade in our image, in steel, free from the sins of flesh. We are Ultron Sigma. We are your god.

Ultron Sigma is the primary antagonist of Marvel vs. Capcom: Infinite. He is the result of the fusion between Ultron and Sigma.

Being the complete gestalt of Ultron and Sigma, Ultron Sigma possesses both individual machines powers combined, along with two of the Infinity Stones, the Reality Stone and the Space Stone. As such, he is one of the most powerful beings seen from the merged universes, with his power comparable to a god's. Their usage of the Reality and Space Stones was the cause of the Marvel and Capcom universes to merge, and they can use the stones in conjunction to tear open holes in reality and rain energy meteors down upon their foes in one of their Hyper Combos.

Ultron Sigma displays almost nigh-invulnerability, his chassis shrugging off blows from the likes of Thor's uru hammer Mjonlnir, Captain America's vibranium shield, and X's Nova Strike, as well as being immune to bullets entirely. Ultron Sigma's high durability more than likely a holdover from his previous form as Ultron, who preferred bodies made of various indestructible metals, adamantium and vibranium chiefly.

Ultron Sigma's strength level is high enough to allow him to effortlessly battle almost the entire joined heroes from the Marvel and Capcom universes alone, defeating the likes of Thor, Dante, and overpowering X, as well as throw the diminutive Arthur aside with no effort, and hoist two Asgardians up by their heads.

Along with his great speed, Ultron Sigma retains Ultron's flight capabilities and Sigma's teleportation ability, allowing him to fly long distances and remain aloft in the air, seemingly indefinitely, and the increased power drawn from the Infinity Stones allows him to teleport much greater distances compared to Sigma's short range warp.

While Ultron Sigma retains Ultron's death ray lasers, he makes more frequent usage of a purple beam saber comparable to Sigma's previous green one, using the saber as his main weapon in his battles against the united heroes of the Marvel and Capcom Universes.

Ultron Sigma's most dangerous power is their final holdover from their time as Sigma: The Maverick Virus. Enhanced by the Reality Stone and renamed the Sigma Virus, not only does it retain its ability to infect most machines and enslave them to Ultron Sigma's will, it now has the capabilities of infecting organic matter, transforming those infected into mechanoids, organic/machine hybrids controlled by Ultron Sigma.

While almost all-powerful, Ultron Sigma is not without weakness despite their godlike image. Because they are a machine at their core, their circuits are vulnerable to overloaded charges of electricity, which can leave them severally weakened and vulnerable to attack. Also, while their chassis is almost totally indestructible, the Infinity Stones they display on their head and chest can be damaged, which in turn harms them and can potentially undo their fusion. After Thanos damaged the Reality Stone on their forehead, Ultron Sigma's body briefly destabilized, with flickering images of their two progenitors briefly visible as they struggled to maintain their fusion while expressing outrage at being harmed.

Also, as they are machines, they do not possess a true soul, and as such, when they tried to use the Soul Stone, the stone rejected them, causing their body to overload and mutate into their Ultron Omega form, that while more powerful, was vulnerable to destruction.

Ultron Sigma was created after Sigma uploaded his consciousness into Ultron's body after they met each other. Sigma held the Space Stone in his laboratory and Ultron was given the Reality Stone by Thanos in an attempt to reclaim it, but the two machines struck a deal instead over their shared hatred of organic life. Beating Thanos, the two then used both stones to merge both realities into one and set into motion their master plan to obtain the four remaining stones, spread the Sigma Virus across the newly-created reality in order to turn all life into technological life subservient to him, and finally rule over as God.

Ultron Sigma's golden plated chassis body formed after the fused machine held both the Reality and Space Infinity Stones. Their second and final form, Ultron Omega, is the end product of the fused robot's foolishness when attempting to use the Soul Stone to its full potential, upon being tricked by Dante.

In the first battle with Ultron Sigma in Story Mode, it is unbeatable, reading inputs, not being able to drop below 80% health, and the Hyper meter filling up like the Mind Stone's Infinity Storm.

Ultron Sigma has possession of both Reality and Space Stones in gameplay, allowing the use of both their Infinity Storms.

In regards to gameplay, Ultron Sigma retains most of Ultron's original move set, with Sigma's teleportation ability and swordsmanship in the mix. Its Hyper Combos are the exact same as Ultron's, with the addition of an extra Level 3 Hyper Combo that allows Ultron Sigma to summon a powerful meteor shower at will. 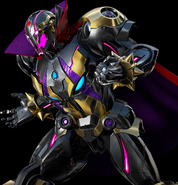