Resigned to your fate, I see.

Vergil is a character from the Devil May Cry series by Capcom. He is the son of the demon Sparda and the older twin brother of Dante. He rejected his humanity and embraced his demonic heritage, leading to his quest to become more powerful that he ever was.

Vergil is a playable character in Ultimate Marvel vs. Capcom 3.

At first glance, Vergil appears physically similar to Dante. While they share the white hair color, Vergil's hairstyle is swept up to resemble his father's. In stark contrast to Dante's wardrobe featuring a largely red color scheme, Vergil wears blue predominantly, and dresses in a manner that gives him a bit of a regal air (in this case; a long coat with three tails and a snake-like pattern on the right side, a black vest and brown boots), in contrast to Dante's more casual look.

Vergil is a cold and aloof individual who seeks power above all else. Any traits of humanity he may have had have been set aside in his pursuit to succeed his father. Vergil has no qualms with fighting Dante or even attempting to kill his brother if it is convenient for him. Though initially perceiving himself superior to his brother, Vergil does not exhibit an outward arrogance. Despite generally serving as an antagonist to Dante, Vergil has been known to fight alongside his brother and set aside some of his warrior ideals, should particular circumstances arise. While not very vocal of it, he does care for his brother and his son Nero.

He does not like firearms, decrying it as a 'crude weapon for an unrefined weakling.' However, he has apparently used guns before, and borrowed Dante's gun and together finished off Arkham using it in Devil May Cry 3.

Vergil possesses the standard demon powers of superhuman strength, endurance, and speed, sharing Dante's powers. Vergil possesses a wide array of abilities that heavily contrasts that of Dante's style. In DMC3, he only had one style and had fewer weapons than his brother, but his attacks were far more fierce and effective and thus, he relied on substance rather than style. His only "firearm" in the game, Summoned Swords, did not strike opponents instantly like Ebony and Ivory, but because they could be fired as he attacked with his Devil Arms without interruption, he has a much deadlier combo game.

Vergil acquires the Muramasa Blade, which he uses on Wolverine to test its power. He would go on to cause destruction with the blade as it has a shared desire with him for power.

True to his playable incarnation in Devil May Cry 3: Special Edition, Vergil is less combo-oriented than his brother, relying on powerful attacks, both normal and special that possess incredible range, making him an ideal mix-up when using assists with solid close and mid-range attacks. Most people who have gotten experience with Vergil refer to him as a combination of Zero (in terms of health), Wesker (in terms of teleportation tricks) and his brother Dante (with his attack range). While not as fast as his brother, attack-wise, he can easily close and create gaps between his enemies using his Trick teleports to allow him to apply serious pressure to his foes.

Vergil's theme is a remix of "One More Game", his second boss battle theme from Devil May Cry 3: Dante's Awakening. 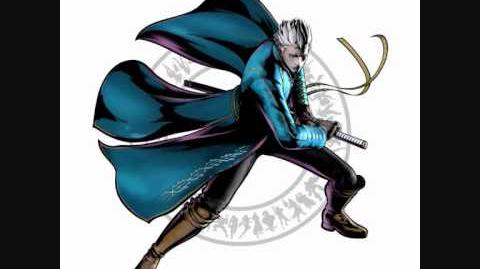 Ultimate Marvel vs. Capcom 3
Retrieved from "https://marvelvscapcom.fandom.com/wiki/Vergil?oldid=79517"
Community content is available under CC-BY-SA unless otherwise noted.